For six months Chester Price has been riding the rails. All he owned was the tattered black suit he wore and a canvas bag containing a shirt, a pair of under wear, a collection of William Blake’s poetry, fifty-five cents and a deck of cards. The cards had been his livelihood since he was eighteen.

There were a lot of rich men in L.A. who didn’t mind losing thousands of dollars in a game. It all went to hell in ’29. Broke and owing two weeks rent, he’d run out of the Beverly Hill Hotel in the middle of the night, the hotel dick chased him down Hollywood Boulevard. Every time he saw a reflection of his bearded face he missed his imported ivory handled razor.

When he hopped off the boxcar in Somewhere, New Mexico, the last game of poker he’d played was with a group of hobos the day before. His winnings were an extra helping of beans and the book of Blake poems.

Next to the switching station was a diner that had a sign out front that said ‘offee’ He pushed open the door to the sound of a tiny bell. There were a handful of people inside, working men, miners and prospectors by the look of them.

“I’ll take one of your thirty-five cent dinners along with a cup of your famous offee.”

“Have to see your money first,” the waitress said lifelessly.

The smile fell from Chester’s face and he laid a dime and five nickels across the counter.

The waitress nodded and set a cup of coffee in front of him.

Dinner was steak, potatoes, peas, carrots, a roll and a piece of apple pie.

The deck of cards found their way into his hand, as they often did.

A slick man in a shark-grey suit sat next to Chester. “Can you do anything useful with those, or just cut ‘em?” Before Chester could answer, the man turned to the waitress. “You got beer?”

“No games being played.” Chester, happy to have someone other than hobos to talk to, told him about his high times in L.A. “All I need is a game,” Chester said. “One good game to get back in the pink.”

The man drained his coffee. “God damn me to hell if that was not the worst cup of joe ever brewed.” He shook his head and slid the cup away. “Funny, you being a card player here in the middle of the goddamn desert. I wouldn’t be here if I would’ve had a decent map. Listen, I’m on my way to Atlantic City. Care for a lift?”

In the fifty miles past town, Chester learned his name was James Vey and he said he was an encyclopedia salesman. He drove a brand new 1934 Cadillac. Chester had no idea that encyclopaedias could be so lucrative.

Just as they passed a sign saying ‘You are now leaving New Mexico’, a thumping noise began at the rear of the car.

Vey pulled the Cadillac onto the soft shoulder with a cloud of red dust and he yelled, “Son of a bitch!” He pushed open his door and Chester opened his door to help Vey find the problem.

Vey pointed at him. “Stay here.”

He walked to the back of the car and opened the trunk.

Chester couldn’t see Vey behind the upraised trunk, but he could see Vey’s arm rise above it and in his hands was a tire iron. Vey brought it down four times and hit something with such force that the car shook.

The whole world was quiet after Vey closed the trunk with a thunderclap. Chester’s heart was beating heavy as Vey walked slowly around the car. He was muttering to himself with each step.

Vey settled heavily into his seat, closed his door and pulled back onto the highway.

“And that?” Vey said suddenly, a thumb cocked towards the trunk, “That was just business. Don’t worry none about that.”

They were seven days from Atlantic City. 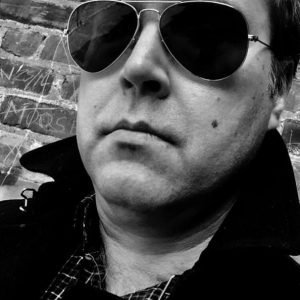 Henry Brock is the author of "Vicious Dogs", a novel featuring down-on-his-luck private investigator Derek Lasker. The second Lasker book will be coming out soon. His short fiction has appeared in "Switchblade" magazine. He spent 10 years working in the film industry and currently lives in the murder capital of Canada. Visit him at: www.laskerinvestigations.com