Becky thought of every contingency except for the rabid skunk. It was down in here with her now scampering around, rooting at everything, biting her, biting Neeko. Not that Neeko cared. Neeko was dead.

The entire plan was clean, really. As clean as plans like this one can be. Becky had thought it through a dozen times. She’d written it all down on lined paper, memorized it, and burned the paper over the toilet, flushed the ashes. A skunk?

Neeko’s hand was leaning against the dirt wall. Pale, ragged. The skunk was chewing on the fingertips, chewed down to the phalanxes. Becky made a noise, something akin to disgust, to incredulity, and the little striped bastard turned and came at her again, right for her good ankle. Again. She tried to jump out of its way, to grab for something above her outside the hole, anything to pull herself out or at least out of the reach of the skunk’s little teeth. But those teeth tore into her skin again, through flesh, muscle, tendon. Tooth on bone. What was it the fifth time it had bit her on that ankle? She kicked at the skunk with her other leg. Her useless foot swinging, dangling from a ragged pain that nearly put her prone down in the hole again, right on top of Neeko. Again.

Her alibi was rock firm. Lord but she had planned this out so well. She leaned there against the dirt, all her weight on her good leg, closed her eyes, and she could see the steps on the paper. Every last one of them. It was a clean plan. A deep hole. God it was so deep. She’d used a stepladder to get in and out of it when she dug it.

The skunk was working over Neeko’s fingers again, its back to her, bushy tail shaking like a black and white feather boa. The light was starting to lag at the bottom of the hole. She had been in here, what? An hour? Two hours? Hard to tell. The sun was pushing down into the thick trees behind her. Her cell phone was in her back pocket. She could call Van, but that would ruin it all. Everything.

She had dirt and rocks down her pants. Even now more dirt broke away from the wall and fell down the back of her shirt. Some grit had worked its way under her bra making a muddy gruel against the soft skin of her breasts.

The fuck? How did this happen? A skunk? She should have been back to her condo by now. Showered, putting on makeup, blowing out her hair. Van would be on his way from across town to pick her up, take her out to dinner, a movie, back to her place for wine and love on the couch.

Where was the shovel? If she could only reach it. Brain the little rodent then dig herself a ramp up and out of there. She felt for a rock in the dirt around her. Surely there was one big enough to pry out and crush the skunk with it.

She had rolled Neeko into the hole and had barely shoveled two little mounds of dirt onto him when the skunk had bit her on the Achilles tendon. Teeth going in like razors. She spun and fell into the grave and landed wrong against Neeko’s thigh and her ankle snapped like a broken branch, and then the skunk was on top of her chest, claws scrabbling at her, and she’d grabbed it in both hands, fur like a house cat in her fingers, and she’d just thrown it off of her.

Now she wished she’d broke its neck. The skunk. The little bastard. She found a rock about the size of a pecan. She threw it, and the skunk lifted its tail, twitched it, and sprayed Becky in the face.

She had planned it out so well.

Crumpled, sitting on Neeko’s head. Phone in her hand. Skunk chewing on the skin around the slick bone sticking out of her ankle. Maybe the stench would clear so she could see to dial Van. Maybe he’d understand. Maybe. 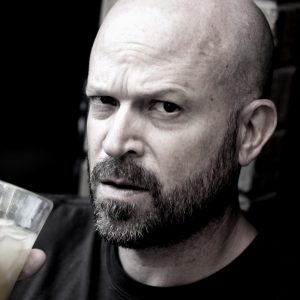 Larry Menlove is a Utah writer with stories published widely in such venues as Weber, Torrey House Press, Sunstone, Twelve Stories, Dialogue, and Plots With Guns. He is nearing completion of his first novel that features love and violence, beauty, betrayal, murder, and an armadillo.