Sam Danou slid into the plastic gloves he used to examine a crime scene. He didn’t expect to find fingerprints in the chaotic swirl of a recently abandoned home. But he didn’t want to cut himself on any of the jagged edges left behind by the metal thieves. Detroit scrappers came in two varieties, the careful ones who took their time with torches and saws to get a still-useable product – copper tubing, say — to sell to contractors who paid for materials in cash, and the dumb ones who pried or hammered out anything shiny regardless of its worth or how they ruined it in the process. This time, Sam saw, it was one of the dumb ones.

“Wonder these guys don’t ‘lectrocute themselves ripping out live wires,” he said, poking gingerly at the tangle of connections sticking out of a hole where a switch plate had been.

“Or flood the place getting at the plumbing,” his partner Elroy said.

“Well,” Elroy said, kicking at the empty soda cartons and fast-food wrappers that already littered the empty room, “it’s the bank’s own fault for kicking out people. How do they like their foreclosed property now?”

Sam took another long look around. He and Elroy were part of a new squad in burglary to catch the metal thieves that were destroying Detroit. Thieves ripped the guts out of still-good houses for pennies-on-the-dollar worth of scrap metal. Everybody knew the way to stop them was to crack down on the yards that bought the stuff from the junkies and homeless that brought it in. But so far lawmakers in Lansing hadn’t passed the bills to let the cops go after them.

“Get me a chicken shawarma,” Sam said. “I’m going to bag some of this stuff.”

With Elroy on the food run, Sam placed a few items in plastic evidence bags: a screwdriver left behind, one pink low-cut sneaker, a woolen ski hat.

Then he waited outside at the curb for Elroy to swing back around.

They pulled into the parking lot of an abandoned public school, slowly eating their sandwiches. They were almost done when Sam nodded toward a middle-aged woman pushing a shopping basket full of junk down the block.

“Pull over there,” he said.

They pulled over just ahead of the woman. Sam stepped out of the car and said in a friendly voice, “Hey, Rosie, working early today?”

The woman, middle aged, shapeless inside her mélange of shirts and jackets and scarves, stared at him with a mix of fear and hostility. Then recognition flickered in her eyes.

“Used to be,” Sam said. “New gig now. Busting metal thieves.” He placed a hand on the edge of the shopping cart filled with a gaggle of old faucets and pipes, soda cans, a lid from a pressure cooker, the twisted rim of a car headlight fixture.

“I found this stuff,” the woman said. She pulled her outermost jacket a little tighter across her chest. “I didn’t steal it.”

“Hang here a minute,” Sam said. Then, walking to the car, he told Elroy to pop the trunk. He reached in for something and then stepped back to the woman.

“You look like you could use this, Rosie,” he said. “Too cold out to be walking barefoot, don’t you think?” He handed her the low-cut pink sneaker.

A smile creased her face. “Oh, thank you, thank you,” she said, taking it and slipping it on. It was a perfect match for the same low-cut pink sneaker on her other foot. “Where’d you find this?” she asked. “I hated to lose this.”

Sam took her gently by the arm. “I’ll tell you down at the precinct,” he said. 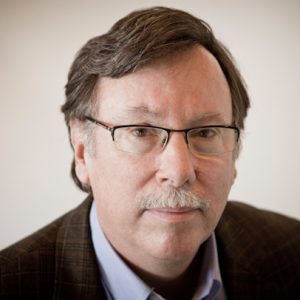 John Gallagher works as a reporter for the Detroit Free Press and has written non-fiction books on architecture and urban planning.