Cutty’s Dodge Charger sounded like it gargled shell casings as it raced northbound on the Nimitz freeway towards downtown Oakland. Three cars followed his lead: a sour apple 1984 El Camino, a candy plum 2009 Ford Mustang, and a bumblebee yellow 2012 Chevy Camaro—all sounding tough as hell. They banded out onto all lanes once they drove past the high-rises overlooking Jack London Square.

The El Camino and Mustang flashed their hazard lights while slowing down. Eventually, they turned their front headlights into one another, front bumpers almost touching creation-of-Adam style to block most traffic heading towards San Francisco. The Charger and Camaro pulled ahead.

The driver of the El Camino hopped out of his whip. Dude was built like a pro wrestler, making it difficult for his hulk-like fingers to press the record button without also pressing three other buttons simultaneously. He was in charge of A/V ‘cause he had it back in school. It wasn’t uncommon to hear him spit hella profanities at his cell phone while attempting to record. He gave a thumb’s up once he saw the blinking red light in the corner of the screen.

In the driver’s seat, Cutty turned the bill of his hat so it sat angled behind his ear. He popped the Charger into gear and slowly pulled forward onto the open road, driving his whip around in a large circle like a great white circling a small fishing boat. Cutty torqued the steering wheel into a tighter turn after each lap while also pressing on the clutch and pulling on the hand brake. The rear tires eventually locked up causing the car to skid. Cutty floored the accelerator, released the hand brake, and let the clutch out. The Charger spun around like a carnival ride, causing the tires to whip up black hashish and leave tire marks on the street.

This was a sideshow. Cars looking like they came out of an episode of Pimp My Ride performed stunts on the street while spectators stood on the sidelines eating hangover food from the local taco truck.

Cutty and his crew were innovators, upping their sideshow game from International Boulevard to a section of the city that would surely produce more YouTube hits and followers once the video went viral.

The Chevy Camaro sped off after the Charger. There was little room for error as the driver maneuvered the Camaro behind Cutty’s—both pulling donuts like a synchronized dance of heavy metal. The driver of the Camaro had the driver’s side door wide open. A holy white Air Jordan shoe cleaned meticulously every evening with a tooth brush dangled outside of the car, dance-kicking to the bass heavy sounds of an E-40 track.

Traffic along the highway built to a standstill. Sounds of car horns could be heard as far down as Fruitvale.

The driver of the Camaro cut the steering wheel too hard while in mid-turn, causing the whip to lose momentum. The Charger continued its hyper orbit unable to slow down. It sideswiped the Camaro, forcing both cars to skid across the lanes. The Charger slammed into the metal railing. The Camaro’s front bumper crashed into the Charger’s back-end, causing the trunk to pop open. Antifreeze and motor oil bled out from underneath both cars.

The driver of the Camaro had the top of his head crowning through the smashed up windshield, while Cutty’s top half hung out of the driver’s side window like a trunk ornament purchased during Halloween time. The other two drivers returned to their cars and sped off towards San Francisco.

Along with garbage collected on the side of the highway was the body of man face down on the ground. Elroys would have to piece everything together once they arrived on scene to investigate. 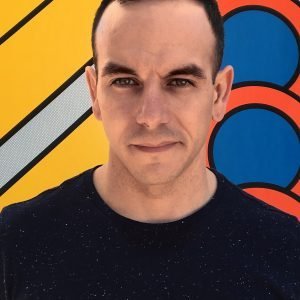 DeLeon DeMicoli grew up in Detroit, MI. He lives and works in Northern California with his wife and son. Les Cannibales is his first published book. Follow him on Twitter at @DeLeon_DeMicoli.