Shoulda lived a different life. Lived it differenter and better and done it all right. I mean, we all make mistakes, but that’s all I done.

Shoulda met a good woman and got a good job and did it the way you’re supposed to. But good women never want to fuck me. And good jobs are for other people.

Shoulda denied my outlaw blood and the voice of my old man, manned up and found the righteous path.

Shoulda stopped drinking and fighting and cussing and doing all them drugs. The speed and the coke and the weed made me someone else. The things I done high weren’t my fault. It was the damn drugs. My fault was in taking them. That’s on me. Never shoulda.

Shouldnta never quit smoking though. Calmed me, made me right in the morning, gave me a break. I knew it wasn’t the smokes that was going to kill me. Not a guy like me.

Shoulda been a better father to Joe and Leo. Born good, but they’re bad now, and I’m the one that made them that way.

Shouldnta been a father at all, if I’m being honest. But I am, so I shoulda done it righter and gave them someone to lean on, to learn from, to trust. An example that they coulda shared with their own kids.

Shoulda went to New York City or Chicago or Las Vegas. Seen the world and walked the streets of Europe or Japan or some foreign place.

Shoulda traveled more than fifty miles from home, been more curiouser or adventuresome or whatever it is that makes people explore. Not having money was just an excuse, when all it takes is a thumb or a gun.

Shouldnta gone in debt to Carter. That one cost me. One more reason to get out of town.

Shouldnta robbed so much from so many folks.

Definitely shouldnta robbed that last gas station to be sure.

Shouldnta shot the clerk. Or the guy in the store buying a coffee. Shooting people just brings bad luck down on a man.

Shouldnta brought the boys with me on that score. Old enough to know better, but’ll still do what their old man tells them to. Didn’t need to be asked twice. Grabbed their shotguns and came with.

Shoulda been the kind of father that went to their football games, played catch with them, helped them with their homework, taught them about girls and their parts.

Shouldnta made them accomplices in a felony.

Shoulda made them take piano lessons or study another language or taught them how to fix cars.

Shouldnta taught them how to shoot, that’s for damn sure, looking back at the situation now.

Shoulda gone it alone a long time ago.

Shoulda started a new life in a new county with a new family. For me. For them. Woulda made it better for everybody.

Shoulda given them more of a chance.

Shouldnta made them the men they are. Men made from their old man’s blood.

Shouldnta double-crossed them after the robbery and took the money.

Shouldnta pointed a gun at my own two boys.

Shoulda found a better way to pay my debts.

Shoulda ran north to the city, to anywhere else. To somewhere where people don’t know me.

Shoulda taken their truck keys and their hunting rifles when I took the money, woulda given me more of a head start, more of a chance.

But you can’t be who you ain’t. And I can’t be a different man just because I don’t like the man I am. This is me. I’m my mistakes. I’m my stupidness. I’m that son of a bitch. And I got to take my hits for the things I done. Take it like a man. 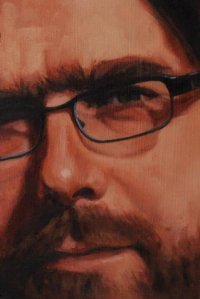 Johnny Shaw was born and raised on the Calexico/Mexicali border, the setting for his debut novel, DOVE SEASON. Although he has been writing for over twenty years, it took that same amount of time for him to finally revisit and explore the people and places of the Imperial Valley, California and the Desert Southwest.

He returns to the area in his new novel BIG MARIA, a raucous adventure set in Blythe, California and Arizona's Chocolate Mountains.

Johnny also acts as the editor-in-chief and is a frequent contributor for the online fiction quarterly BLOOD & TACOS, a loving homage to the men's adventure paperbacks of the 1970′s & 1980′s.