Old man Poppy potters and comes back across the room with a coffee pot and a pair of mismatched cups.

“Still don’t know why anyone would care about them old days, Mr White.”

“The readers care, Mr Poppy. With men like John Dillinger running around there’s been a real resurgence of interest in the outlaw life.”

Poppy snorts and sets down the cups.

“But Samson’s Crossing…nothing special happened that day, nothing no one would pay red two cents to read.”

White looks up from his notepad.

“S’pose not. Nothing else to do on a day like this. Wouldn’t have a snifter with you, would you?”

White takes out a quart-bottle filled with amber. A good slug goes into each coffee. Poppy drinks a swallow slowly, then speaks.

“Weren’t nothin’, was coming down off a two-week drunk. We’d jumped a mule train from a silver mine over the border and been living it up in the saloons and bordellos hoping no damned big hats came a-looking.”

“Still hear from them?”

“All in the ground now – Charlie only passed over a year back, Dave a little less.”

Scribbles in the notebook.

“So you all rode into Samson’s Crossing…”

“Bob Earle’s sister had been engaged to this fella – William Berg – but he’d run off with a Spanish chippy ‘stead of doing the right thing. Left old Bob’s sister with a fat belly and no ring on her finger. Anyway, we get into the cantina, served the best chilli that side of Pecos, and before we’ve even sat down a shot rang out. Missed all of us. Fella has seen us and thinks we’ve come to do him in.”

“All I wanted was a plate of chilli and a beer. Course if we had known he was there…”

Poppy laughs and White laughs too.

“So did we! So drunk the five of us were fumbling our guns and the bastard fired again – another miss! He had a friend with him who threw down at this point, that kind of focussed our minds. So we threw a volley back. Dropped his friend but old Will Berg got down behind the table. This time he didn’t miss – drilled a shot right through Cole’s leg. Then our hangovers fell away real quick, turned into a killing time. Emptied our pistols through his table and then reloaded, did the same again. Shot the shit out of that fucking place.”

“But only Berg and his friend were put down?”

“Hell no, couple of greasers got sent over, barman too. The lead sure did fly that day. Then we lit out – put another rain of bullets all around to discourage any pursuit. Pissed I never got my chilli.”

“I’ve read that a couple of other people died that day.”

“Man and woman named Weiss, just moved to the town from up North, immigrants.”

Poppy shrugs and downs the last of his coffee.

He gets up and heads into a large cupboard in the hallway.”

“Still can’t get used to pissing inside.”

White’s smile has fallen away. He reaches into his bag and takes out a cut-down .38. He stands and moves into the hallway until he is outside of the water-closet. He raises the pistol.

“Lot of people died because of that day, Mr Poppy, you’re just the last.”

He raises the pistol to the door. The bang that he hears is louder than any pistol report and he slams back against the wall, torn apart by the heavy load of the shotgun that Jack Poppy is holding on the other side of the door.

“Were they kin of yours, son? Must’ve been. Well, I am truly sorry for any suffering caused to you – all I wanted that day was a bowl of chilli.”

Poppy cocks the second barrel – if a man will try to kill you once like as well he will try again and that just won’t do. 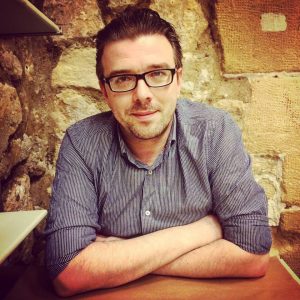 Benedict J Jones is a writer of crime, horror, and western fiction. He has had over forty short stories published, as well as the Charlie Bars series of PI novels by Crime Wave Press and the splatter punk horror novella "Slaughter Beach" through Dark Minds Press - who also collected his weird westerns in the collection "Ride the Dark Country". He lives jointly in London and the dark halls of his imagination.