The state legislature suffered billions of dollars of debt from general mismanagement and a basic fiscal misunderstanding of revenue streams (i.e. that when they cut taxes there would be much less money in the coffers). The politicians decided to pursue a radical social agenda in hopes it would hide their absolute incompetence and keep them in office. They passed a slew of notorious bills that were signed into law by an equally incompetent governor. Abortions were allowed only after a 25-page application was completed, followed by a mandatory nine-month waiting period. Every class, concert, and sporting event required a public prayer before they began. And all students at state colleges and universities were required to purchase guns upon enrollment.

Regarding the last law, students would be cited for not bearing a firearm at all times. Athletes in certain events like swimming and football were exempted from carrying weapons while in competition as long as they stashed their firearm on the sidelines. Other events like theater were not afforded this exclusion. So Romeo and Juliet spoke their seventeenth-century lines with pistols holstered on their hips regardless of the setting.

Several misfires happened on several campuses. Foot and leg injuries were the most common. Drunken students firing into the air on Thursday, Friday, and Saturday nights received citations. There had been so many accidental discharges that many students and faculty wore full body armor to classes. Although many students thought the law was absurd, they kept their opinions to themselves. Speaking out against the law would garner the label unpatriotic un-American liberal Muslim-lover, resulting in a double citation.

When Texarkahoma University accidentally sent out an active shooter alert through their emergency notification system, several hundred armed students were ready to respond. The errant message stated that an active shooter was inside the Engineering Building. Dozens of students rushed from their classrooms, firearms raised, safeties off. When the Engineering building doors flew open with students streaming out, “heroic” students running to the building mistook the escapees as the shooters and opened fire. Trapped, the engineering students returned fire. Stray bullets hit law students in a nearby building. They shot back, accidently wounding chemistry students. This action earned a reprisal of bullets, of course, and their stray volleys nailed random humanities and education students. They returned fire on those who they correctly identified as active shooters.

The campus and town police forces, both radically depleted in size due to budget cuts, arrived late to the scene stuffed like clowns in a couple of cruisers since most of their vehicles had been auctioned off to pay off the state deficit. While they did not know what was happening, they knew they had to get the situation under control. So they opened fire randomly on any and all students figuring one must be the shooter.

“At worst most of these students are liberals anyway, which constitutes the gravest threat to our nation,” the town’s police chief assured his officers.

His sentiments aligned perfectly with the talk show hosts he and most of his officers listened to and watched daily. Unfortunately for the officers, they did not fare well in the ensuing battle. Even with training, the twelve officers faced an overwhelming student body of 17,000.

Months later, after the bodies were buried, survivors were patched up or sent to rehabilitation, and investigations were stymied by politicians as directed by the gun lobby, a select legislative commission determined that the entire massacre could have been avoided if the students had had proper gun training at an earlier age. So house bill 5150 swept through both the House and Senate and received the Governor’s signature requiring elementary school students to learn, use, and wear guns. It was the only responsible thing to do since no place could afford to be gun free any longer. 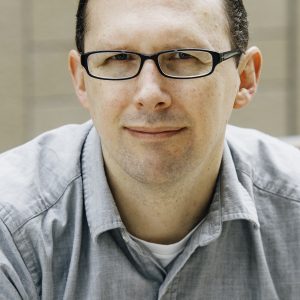 Bloodshot and Bruised is Travis Richardson‘s debut collection of short stories. He has been a finalist and nominee for the Macavity, Anthony, and Derringer short story awards. He has two novellas out, Lost in Clover and Keeping the Record. His stories have been published in crime fiction publications such as Thuglit, Shotgun Honey, Flash Fiction Offensive, and numerous anthologies like Low Down Dirty Vote and The Obama Inheritance. A few years back, he reviewed Anton Chekhov short stories at www.chekhovshorts.com. He lives in Los Angeles with his wife and daughter. Find out more at www.tsrichardson.com