Show me a hitman with the yips and I’ll show you a dead man walking.

I read once about a shortstop taking his bat to confessional to bust a hitting slump. I could have got my gun ordained and it wouldn’t have broken my cold streak.

The jammed pistol in Houston was strike one. The unexpected security detail in Poughkeepsie; two. Hitting the wrong mark in Bakersfield; a foul ball. I was on a pitcher’s count and expecting Levi’s call. He didn’t disappoint.

“Ira, we got to talk,” he said, nasal, like a bee with adenoids.

My stomach felt like I’d swallowed rocks. I’d had thirty years, a good run. When a hitman gets retired there’s no trip of a lifetime, just a long walk off a short pier. Levi had no choice; I knew where the bodies were buried, literally. Running wasn’t an option. Levi would send Rudi to find me. I’d been doing wet work since Rudi was in short trousers, but he was the future now.

“Kid’s an artist,” Levi had told me. “Hands like paintbrushes.”

I was a dinosaur. Meeting Levi and winning him round was my only chance, albeit a slim one.

The usual place was Room 23 of the Garden State Inn, just off the Boardwalk in Atlantic City. The Inn’s yellow stucco was cast in sharp relief against the sepia sky. It was October and off-season. Seagulls, hopped-up on grease, hovered low over the milky ocean.

I arrived early and took a seat at the bar. The barman’s tux looked like he’d borrowed it from a costume shop. Eventually, he nodded in my direction.

He poured. My hands trembled. He noticed.

“Something on your mind?” he said.

I shook my head again.

He missed the hint. “Meeting somebody?”

“Dutch courage,” he said, as though to himself, polishing the same glass he’d been working at for five minutes. I drained my drink and headed up the stairs.

An elderly maid pushed a cleaning cart along the hallway. I nodded and she smiled back. Either the cart’s wheel or her hip needed oiling, I wasn’t sure which. I checked the knife in my sock, knocked three times on Room 23, and entered as per protocol.

The bed was still made, a chocolate on each pillow. That’s when I knew something was wrong, Levi could never resist the free candy. A mirror was on the wall opposite. I closed the door behind me and stepped into the room, then saw Rudi’s reflection leave the bathroom behind me.

Out of instinct I dropped to a crouch and kicked Rudi’s right knee side-on. He swung his gun at me and missed, buckled, and fell to the floor face first. I spun, put my knee in his lower bank, and hammered his closed fist against the bedpost. His grip loosened on the third blow and his gun slid across the thin carpet.

Rudi threw his elbow back, connecting with my nose. I tasted copper. He crawled across the floor after the gun, reached a chair first, and launched it towards me. I ducked and it shattered a mirror behind me. I jumped on his back using my full weight, gripped my arm around his neck and snapped it. He collapsed, slack like a broken rubber band.

A peach coloured phone sat on a console table in the corner of the room. Five minutes later, it rang. I answered. It was Levi.

“You were overthinking. Needed to get back to instincts, muscle memory.”

“Thought he was the golden boy. Hands like paintbrushes.”

“He started painting outside the lines. I don’t need that. Plus, form is temporary, class is permanent.” 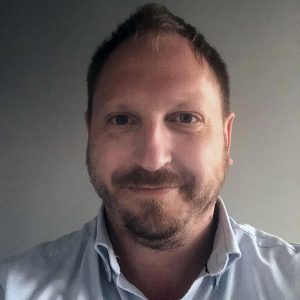 Adam Leeder lives in Suffolk in the U.K. His work has been published or is forthcoming in Mystery Weekly, Guilty and Punk Noir. His short fiction has been longlisted for the Crime Writers’ Association (CWA) Margery Allingham Short Story Prize. His debut novel, Diaspora, was shortlisted for the New Anglia Prize, which is sponsored by the U.K’s National Centre for Writing.