She went by Roxy now and he watched her talk to men. She had only two outfits, blue and pink—neither of which stayed on for long. Bikini top, tight skirt to match. Blue and pink. Will it be a boy or girl? He’d been told it was bad luck to buy the crib or paint the room until the baby is born. Turned out it was true.

He knew Roxy’s song and he’d hurry to the back under the whine of a wah-ing guitar riff. The club had only one toilet stall and it was usually occupied—but not tonight. He plugged his ears on the can, breathing in and out hard to stall the hot spit rising in his throat. He’d been away a long time. Never in one town for long.

The club had no liquor license. Only beer.  The black lights made the lice crawling on the coats of its customers ghostlike, shimmering. Hunchbacks and hillbillies with their snarling cat calls.

Two nights prior, the bouncer got to use his blackjack—a lead slapper sheathed in leather. The wet smack of it against a grabby man’s skull. The bouncer bitching how the stitching had come loose and he’d have to find a shoemaker to fix it back.

The girls’ phone numbers were Sharpied on the stall door. No matter how often he used a nail or licked his thumb to obscure Roxy’s digits, they always got drawn back in.

Girls had approached him previously, but never Roxy. Even after all these years, he wondered if she’d recognize him. He knew her right away. She took after her mother so much it was as if there was a mold somewhere.

He sat on the toilet. Ignored the banging on the stall door. Heard another man grunting just feet away in the tight, foul room as he worked himself and left the mess in the sink without faucet fixtures to wash it away.

The big coat he’d bought for the cold helped him hide the gun. He took it out after standing on the can and making sure he was alone. It still had the price tag hanging off the trigger loop on a small string. The pawn shop didn’t run the fake name he offered. Maybe the clerk saw the desperation and used the last of his pity to nod ahead the sale. Or maybe it’d just been a slow day.

Knowing he might have to use it on the bouncer once he grabbed Roxy, he got himself ready by closing his eyes—seeing again the wonderful relish the bouncer took in swinging his blackjack. The bouncer was big. He’d have no chance with fists. He’d been searched the first night, but not on the several nights he’d been back since. The bouncer took his cover wordlessly each time. Never did their eyes meet. You’ll get over it, he told himself. It must be done.

Roxy was back at the bar. Some stranger had his finger tucked beneath the strap of her top. He gripped the butt of his pistol and thought to shoot this man for touching his daughter. But no. The man would be lucky to die with those thin, tattooed shoulder blades in his eyes. The feel of her skin on his knuckle. He’d have to turn the stranger. Press the barrel to the soft flesh beneath the chin.

In the bar mirror, a glance from Roxy unnerved him as he approached. A glimmer of recognition in her dark eyes. Questions in the quivering eyelids, answered by his hanging jaw. Her accusations. His apologies. There could be no fixing or forgiveness.

The man tracing her tattooed wings was oblivious. Wings that didn’t carry, take flight. Paint embedded in the skin that shielded the blood they shared. He’d given up his claim, his guidance, when he’d left her as a little girl. Too quickly she’d become a woman. Life had chewed them up, savoring the taste.

He took the blame in the temple ten days later, a hundred miles away, resting his back against the stone that bore his wife’s name and the date she died. Roxy’s birthday. 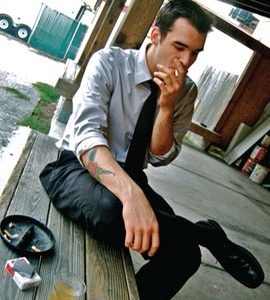 Steven Vineis is an MFA candidate at UNCW. He won the 2021 AWP Intro Journals Award. His work has appeared or is forthcoming in Hayden’s Ferry Review, Brooklyn Vegan, The GSU Review, Portals, The Talon, Between the Lines, among others.