I bypass the front desk of the Washington Hilton and head straight for the elevators. When I get to the top floor of the hotel, I walk to the end of the hall and knock on the door marked the Reagan Suite, christened forty years after a bullet nearly ended the Gipper’s life on the street below.

A few minutes go by before I hear movement on the other side. The door opens just a crack, enough for me to see a woman’s mascara-smeared eye peering out at me from the darkness.

“May I?” I ask, knowing Harlow already informed them I was coming.

She hesitates for a moment, then steps back. I enter the suite, locking the door behind me. I can see now she’s a girl in her early twenties, barely holding onto her composure.

“Take me to the congressman,” I say.

Without a word, she leads me through the lavish suite into the main bedroom, where I find the congressman slumped on the sofa, half-dressed and near-catatonic, almost unrecognizable from the polished version I’m used to seeing on TV. He’s one of the reasons I’m here; the other one is lying naked on the bed.

The body belongs to a young man, roughly the same age as the girl, his face waxy, eyes dull. White powder covers the glass table next to him, and his hand is still clutching the Amex card he was using to cut it into lines.

After five years working as a Swamper—that’s what they call hired guns like me—I’m used to scenes like this. It’s the reason Harlow, the congressman’s chief of staff, is paying me to handle his boss’ “situation.” He knows I deliver with a minimum of fuss.

I take a deep breath, and start thinking.

The first thing I need to do is take care of the girl. She looks like she’s about to melt into a puddle at any moment, but I’m used to dealing with her type.

“What’s your name?” I say, gently putting my hands on her shoulders. She tells me reluctantly, and I ask her to get dressed and call a cab. Before she leaves, I hand her a wad of folded bills—the price for her discretion, with the assurance that there will be more if she keeps quiet.

Once she’s gone, the hard part begins. Ignoring the congressman’s muffled sobs, I wrap the body in a plastic shower curtain taken from the master bathroom. There’s ten hours until checkout time, long enough to find a way to transport it outside and into the trunk of my waiting Honda. In the meantime, I flush the drugs down the toilet and start wiping down the floor.

Just as I’m beginning to feel good about my time management, the room phone rings. Immediately, I have a bad feeling: either a guest complained about a suspicious noise from the suite, or the girl was stopped on her way out of the hotel. I figure we have five, maybe ten minutes before there’s a knock on the door. Crunch time.

I’m stuffing the body into one of the closets when I hear a groan behind me. I realize then that the congressman isn’t on the sofa where I left him. Instead, he’s standing on the sill of the open window, his eyes dead, his face a sickly white.

It takes me a moment to register what’s happening. When at last I lunge for him, it’s too late—he’s gone.

Staring down at his body on the sidewalk twelve floors below, I feel the sensation of everything starting to unravel. The phone keeps ringing, and I can hear screams coming from the sidewalk. The cops will be here any minute. Ditto the press.

With my hands clutching the window sill, I take a couple deep breaths. Then I close my eyes and start thinking. For years I’ve gotten people out of bad situations. Now it’s time to get myself out of one.

Because if there’s one thing I know, it’s that no Swamper is coming to save me. 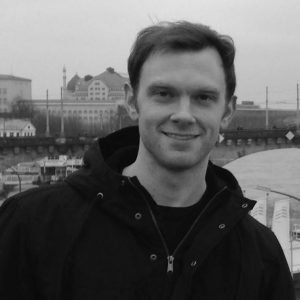 B.L. Conradis was born and raised in Washington, D.C., where he currently works as a journalist. You can follow him on Twitter at @BConradis.