The tree house was safety. Whenever glass shattered or flesh thwacked. Out the window, up eight planks, a hideout till shouts simmered. Cigar smoke drifted through slats. Charlie covered his ears, forearms blistered from being ‘Too damn stupid!’ Newest scars in the collection; Ma still had him beat. Through the kitchen window, could see a busted jaw added to her list. He rocked atop a litter of comics, praying for an end, imagining a new world, ripe with adventure—happiness. A world without Ma—without rules. A world where Doyle fit snug in a coffin.

Life nowadays was purely voyeuristic. He grabbed binoculars off a nail and scoped the neighboring house. Older boys, sometimes pretty girls. Stole a beer from ’em once—they were busy wrestling Molly McClusky. First clam he ever saw, still dreamy. Ma told him to mind his own but what’d she know besides taking a punch.

The yard was cluttered with car parts; an old Toyota bed on blocks. Two boys emerged, wheelbarrow in tow. Charlie double checked the kitchen; Ma shook in Doyle’s rusted arms, clenching a fork. Would be awhile before they called for supper. He turned back to the truck bed, watching as the boys swung orange tipped axes, cheddar like, dismantling methodically.

In all of twenty minutes, metal flanks were strewn about weeds. The boys stood by the wheelbarrow, thirty-six black packages piled (Charlie counted as they were tossed from the lining). He listened as the bald boy stuck one with a finger.

The cackle out the gaunt boy made his skin crawl. Always snorting like some goddamn piggy. Was pondering the package contents when Doyle’s baritone shattered the world.

The boys looked up from the yard, straight at him, pupils the size of melons till he dropped the lenses. He ducked from the window, acting invisible, peering through a hole he’d made for just an occasion. The boys scrambled out their side gate, axes low. He watched as they sprinted for Doyle’s front door, grabbing a rubber band gun, sliding it down his jeans. Heavy knocks made him shudder.

Ma snapped from the stupor, smearing her leaky face.

Charlie heard the door unlatch as he slithered down planks. Only option was running.

Doyle: “The fuck are you, some nigger knockers or somethi—”

The crunch rattled Charlie’s eardrums, followed by a loud thud. Could see Doyle’s boots on the carpet, steel toes up, twitching a two-step. He rolled behind a lawnmower and saw baldie shove Ma off the chair, mouth so busted, couldn’t muster a scream. Teddy rushed into the backyard, up the planks.

She grumbled nonsense, swiping the fork at his calf.

Charlie flinched at the coming blow. The splat was his starter pistol. He dashed for the side gate, one he’d climbed a million times. One he’d almost climbed again. Thin bones clenched the base of his neck, tearing him off the fence, slamming him to soil. He gasped for air, wincing at the gleaming blade, high over head. He pulled the wood pistol.

The axe thumped beside him.

Charlie opened his eyes. Both boys hovered like gravediggers.

Baldie snatched the toy gun. “Look at him, man. Face all busted—raccoon eyes.”

“Supposed to handle anyone that gets in the way—never said nothin’ ’bout no kids. ’Specially ones this fucked.”

“Hold your dick—I’m thinkin’.” He scratched his dome. “Stand him up.”

Charlie coughed while being yanked.

“You seen too much. Me and Teddy here used to spy on folks when we was eight too. Never resulted in no shit like this but…hey—you’re welcome.”

“Hell, Teddy—little shit’s comin’ with us. How that sound?”

Cackle—snort. “Go on an’ smile, kid—not every day you rise from the dead.” 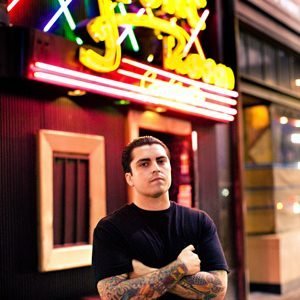 Nolan Knight is a third-generation Angeleno whose short fiction has been featured in various publications including Thuglit, Needle and Beat to a Pulp. His debut novel The Neon Lights Are Veins will be published by 280 Steps in fall 2016. www.nolanknight.com / @Nolan_Knight_