They don’t tell you they’re gonna give it back.

The cruiser pulled in slowly, coming to a slanted stop at the top of the driveway. What were they here for? It had been over a month. They do welfare checks after these sorts of things? Guess so.

I watched him through the picture window. Pausing. His head drawn to his lap. Maybe just replying to a text. Maybe getting up the nerve for whatever he had to tell me. He couldn’t see me through the glare of both his glass and mine. Or maybe he could.

The deputy finally stepped out, tilting his head to mouth something into the shoulder mic. He circled to the back of the car, lifted the hatch, and pulled out a box. Square and white, like one of those gift packages full of overpriced steaks and a block of dry ice.

I opened the door before he had a chance to knock. Pleasant, not somber. Dad’s ashes were long scattered from the overlook he had mentioned that one time. Like an afterthought. Like it even mattered. I knew what was in this box, now.

As he opened it to show me, I could see it in his eyes. He admired it. Another “gun guy” like Dad. Like me—even though we never called them guns. They were rifles or shotguns or pistols: single-actions, double-actions, bolt-actions, lever-actions, pumps, semi-automatics, tube-fed, or magazine-fed tools, referred to by caliber. Each with its own purpose: deer, rabbit, skeet, ducks and pheasant. Or bowling-pins, tin cans, milk jugs, paper silhouettes.

The deputy didn’t wanna say it—out loud, anyway—so I did. “It’s a beautiful piece,” shaking my head the way I thought I was supposed to. A tool used only once. Dad’s revolver. The Colt. Pure craftsmanship from butt to barrel. Elegant symmetry. The dimples on the chrome cylinder still polished enough to see your warped reflection in it. The trigger pull was heavenly.

I shook my head again thinking about it. This collector’s piece. Its cylinder had held only one bullet. His. The spent brass of the single round had escaped its tissue wrapping and lolled in the bottom of the box. The deputy gauged my reaction with morose curiosity. Maybe I was the only one seeing the paradox in the etching scrawled into the barrel: Python .357. Some snakes strike fast and deadly. Others constrict, suffocating the victim. Can’t say I didn’t see it coming. But it was the cancer that had squeezed the life from him, not the snake in the box.

It replayed in my head on split-second loops. There wasn’t a muffled pop. There never is, no matter how the movies make it sound. The report boomed in the enclosed space, rattling the house, and me out of bed. I knew what had happened before I caught the lingering nose of nitro and graphite as I ran down the basement stairs. A thin line of it hung over him in wispy, drifting threads.

The blood didn’t bother me. Growing up, I had wallowed in it with him, elbow deep in the cavities of still-warm kills—the steaming gore converted to meat on the table. As a boy, I devoured every marksman’s lesson he gave as hungrily as the grilled tenderloins that those lessons rewarded. Dad wielded each of his tools like a master painter his brushes.

His final piece, though, was a two-tone emulsion. Part of it a wall-sized Pollock on a sheetrock palette. The rest of him creeping across the gray cement, vermillion to black cherry as it slowed.

The deputy unsnapped a clipboard from his hip pocket. He signed, I signed, and it was mine. I didn’t know they were gonna give it back. But now I don’t know if I want it. I don’t know if I can think about that smooth trigger pull the same way again. 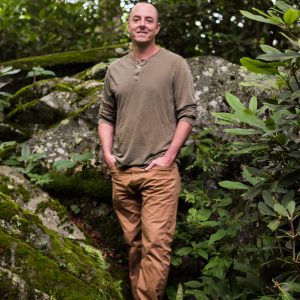 During the day, Jim Hamilton is a field faculty member with NC State University’s Cooperative Extension Service. While he's written the requisite number of articles in obscure academic journals to warrant his PhD in forestry, he enjoys reading and writing fiction. His first novel, “The Last Entry,” was released in 2019 (http://thelastentry.com) and is set in the Appalachian mountains of western North Carolina where he calls home. You can see what he’s up to on Facebook: jimvhamilton