Sofia Rojas inhaled the steam rising from the ancient cast iron pot. Like all of the Rojas women, at fifteen, Sofia possessed the exquisite sense of smell that told her what spices to add and when the food was done. She dropped the last of the beef into the pot, closed her eyes and breathed in the steamy scent of the Menudo.

“What does my daughter’s exquisite sense of smell tell her is needed in the soup?”

Carleda Rojas stepped to the stove, leaned over the pot and breathed deeply. She turned to Sofia in surprise.

“Mija this is beef, not tripe. How did you pay for this?”

“It was going to be a surprise Mommy. You’re home early. Is everything okay?”

“The water pump at the diner died again. But, don’t change the subject. How did you afford the beef?”

“Your beloved son Jorge called this morning. He got paid early and told me to cash the remittance check that came today. The Covid overtime at the hospital gives him fifty extra dollars a week and he wanted me to hide that. He said to plan to leave San Salvador for Los Angeles soon. He sent Oregano, my college application and things for my school projects. I bought groceries and then hid the rest of the money to keep it safe from…”

Carlos Geismar, El Hombre de Remesas, the Remittance Man, was standing in the kitchen door. Running the largest extortion operation in San Salvador he knew the remittance payment schedules of the city’s poor, unprotected citizens. Since their father’s death and Jorge’s move to California the Rojas women were in that group.

“Senora Cruz at the grocery tells me you bought some beef this morning. And I thought you might be doing favors to get extra money without letting me help you. But then I learned your remittance check came early. You weren’t going to keep it from me, huh? But I will still do you a favor if you do one for me.”

Geismar was fifty, balding, with a belly hanging over the belt of his white linen pants, the jacket stained with sweat. He looked Sofia up and down as Carleda stepped in front of her daughter. It was then that he saw the soup pot and smelled the aroma.

He smiled, grabbed a large bowl and filled it with soup and most of the beef and sat down. “A beer Sofia! And then the money.”

Sofia set the beer bottle on the table and went to her room bringing back all of the money except the extra fifty.

Geismar smiled smugly, finished the Menudo, guzzled the beer, belched loudly and looked at his watch.

“I am late for another remittance visit but I’ll be back.”

As he left Sofia picked up his empty bowl and froze as her exquisite sense of smell took over.

“Did he use those packets Mommy?”

“He poured half in before I saw him. What spice beside oregano did Jorge send? This smells like burnt almonds.”

“It is ground Millipedes They produce Hydrogen Cyanide. For my science project I wanted to test how lethal it was. What happened to the poison sticker that was on the packet?”

Before Carleda answered Sofia ran to the window as she heard yelling. Geismar stumbled and fell into the street a block away. Dr. Flores ran out of his office to help but finally stood and pronounced El Hombre Remesas dead from a heart attack.

“I should tell the police what happened. I’m responsible.”

Carleda turned and poured the leftover powder down the drain. She took the poison sticker hidden in her hand and placed it in her pocket. Then she scoured Geismar’s bowl until her exquisite sense of smell was satisfied. She joined her daughter at the window and watched the police and undertaker place Geismar on a stretcher and saw the smiles on the faces of their neighbors as they drove him away.

“No Sofia, you’re not responsible. His greed was. Now he will report to a higher power, and will have to remit what he owes”. 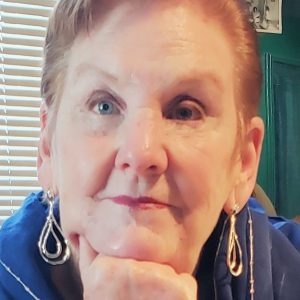 Pamela Ebel was born in Northern California and raised by southern women; part of the diaspora created by the Great Depression. She returned to her roots at 21, receiving an M.A. from LSU-Baton Rouge and a JD from Loyola New Orleans. Her careers have included lawyer, university professor, associate dean, and now fiction writer. She travels between New Orleans, California, Alabama and the Mississippi Delta sharing tales from the crossroads of America. And like the ancient Greeks and the Irish, as a southern writer she knows you can’t out run your blood.