When I was in the 6th grade there was one night I just couldn’t sleep. I MTV until it was time to go to school. I laid on the couch with my back turned to the TV, hoping the music would put me to sleep. That night they must have played this song by Jewel – you remember Jewel? – at least four times.

“Dreams last for so long, even after you’re gone,” she sang.

When I was eleven years old, hearing that song, I knew that I was too young to fully understand the pain this beautiful woman was crying about. Someday, I thought, I would come back to the song after a heartbreak of my own and understand exactly what Jewel was saying.

So, fast-forward a few decades, and Tina leaves me. An inert piece of shit, she called me. I had imagined my life with her and having her walk out on me was forcing me to re-imagine my existence. In a way, it was a death.

And Spotify, knowing the sad sack that I had recently become, actually recommended me a grouping of playlists they collectively referred to as “sad songs.” One of those playlists was called 90’s acoustic. And there, in the middle of the playlist was “You were meant for me.”

Finally, I knew what she meant. I knew it too well.

A week after Tina left my apartment proclaiming that she would never speak to me again, I sent her a text that said, “I was meant for you… and you were meant for me.” She never responded. Maybe she just didn’t know the song.

I had an uncle who lived his whole life alone. His beard always had food in it. Probably bugs also. He smelled like cigarettes and unwashed balls. I remember overhearing my mother talking about him once. “The man would be different if he had someone to share his life with,” she said. “They would minimize some of his, you know, less desirable eccentricities. But, well, he’s too far gone for a woman to be interested in him now.”

Looking in the mirror and seeing a dead skin flake hanging from my own patchy beard, I thought, how long would it be before I was too far gone? Was I too far gone already?

After two weeks of no messages from Tina and sleepless nights full of self-loathing, I had come to look at every woman I saw as a potential life partner. Would she save me from myself? Would she be my Jewel?

And one day I went to the Quick Check down the road to buy some toilet paper. In the parking lot, sitting with the door open to an old jalopy, was a woman. With one leg out of the car and her head resting against the steering, she had her eyes closed tight and was muttering something to herself. I thought maybe she was in pain.

She turned to me and opened beautiful blue eyes. “Just having a rough day is all. Thanks for asking.”

I nodded awkwardly and went into the store. I was walking down one of the back aisles looking at the magazine covers when I heard the same woman’s voice again. “Take all the money from the register and put it in the bag or I will pull each one of your teeth out with pliers, motherfucker.”

I turned down the aisle and saw her, the women from the parking lot. She had a pair of pliers in her hand and she was pointing them at the cashier, a kid of about sixteen. After the kid put a few handfuls of cash into a canvas Trader Joe’s bag, the woman ran out of the store.

Smitten, I followed her. There she was in the parking lot, cursing at her car. It wouldn’t start.

I came over and knocked gently on the hood. “Want a ride?” 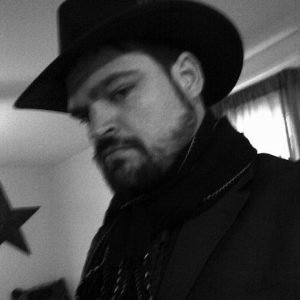 Stanton McCaffery’s short fiction has appeared in Out of the Gutter Online, Heater Magazine, and Between Worlds Magazine. His novel, Into the Ocean, is available from New Pulp Press. He is currently shopping around his second novel.