“Things are happening,” VH said, “and I need to know who Ican trust. Uncle Harley is high on you. Says you’re practically family.”

“Is it?  Why were you dealing before?”

“I was short of money and it was easy.  Until it wasn’t.”

“You said your supplier didn’t even know you’d been busted.  What kind of trust is that?”

Clay thought this over.

“Plus,” Clay said, “who’s going to believe an Emory law student is taking orders from a hog farmer in Dennon? Isn’t that why you want me?  Because nobody would expect it?”

“If your enemy expects you to go north,” VH said, “go south.”

“My granddaddy used to say that.  Look over here.”

Clay stared at the brown crusted concrete tank, the heavy sludge that was somewhere between liquid and solid, and wondered how deep it was. All kinds of shit jokes came to mind, but a tightness in his stomach told him not to speak.

Lee and Elson dropped the tailgate and pulled out a canvas bundle that grunted when it hit the ground. Clay’s neck hair stood up.  VH nodded and they pulled the canvas to the edge of the manure pit.

“I’ll probably keep this pit, after the new one’s finished.  Sentimental reasons,” VH said.  He stood at the edge as Lee and Elson untied the rope and pulled the canvas open.  Inside was a man, his head dripping with sweat and eyes rolling from VH to the cousins.  Duct tape covered his mouth.  Clay’s mouth was suddenly dry.

“You know what I want, don’t you?” VH asked.  He took a step back and the cousins picked the man up and lowered him until the top of his head touched the sludge.  His moans turned to muffled screams, then to choking.  VH nodded and they dropped him back on the ground.  Lee pulled off the duct tape and the man took in huge gulps of air, choking and coughing.  VH knelt beside him and waited till the coughing subsided.

“You know the gasses in there, they can be lethal,” VH said.

“VH I swear¾“ the man said in a squeaky voice.

“You got your methane and ammonia, but there’s others.  Hydrogen sulfide’s the deadliest.  You stir that sludge and it really pours out of there.  Two breaths of that high concentration can kill you.”  VH looked at Clay.  “That’s why the new one is vented so well.”

Clay’s heart was hammering.  He fought to keep his breathing even and face blank.  VH’s slight grin told him he wasn’t succeeding.  VH looked back at the man in canvas.

“I need a location and a name.”  He looked at Clay.  “We thought this guy was long gone with our shipment, but Uncle Harley remembered he had a sister in Savannah.  Harley and his details.”  He looked back at the man.  “Who was your contact?”

“Lee, grab that rake and stir that slurry some.”

The rake was a pitchfork; its tines curved ninety degrees.  He plopped it into the sludge and stirred.  The fresh smell drove Clay back.

“Smell that?” VH asked.  “That’s that gas releasing.”  He nodded and Elson pulled him toward the pit.

“No!” the man screamed.  “Skull Creek!  Just south of the mouth!  That big stretch of beach!”

“Jaspers!  That DEA guy.  He always knows where the feds will be.”

“See Clay?” VH said.  “Feds got no trust, either.”  He pointed with his chin and Elson picked the man up by the feet and shoved him into the sludge head first.  He didn’t even have time to scream.  His legs kicked, but only for a few seconds.  Elson pushed him in to the knees, then Lee pushed on his feet with the manure fork till the thick brown sludge closed over his soles.

“He’s got plenty of company down there,” VH said. “None of them were family, either.”

Elson clapped Clay on the back and grinned. 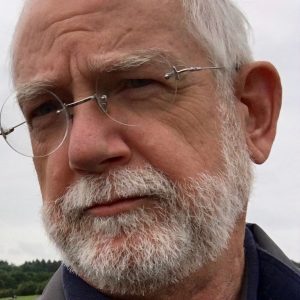 David Powell writes full-time in Georgia, though his day jobs have run the gamut from studio musician to farmhand. He seeks out the neglected corners where things whimsical, dreadful, or pitch-black hide. David is  a member of Horror Writer's Association and has published weird fiction in Grue and Argonaut, crime fiction in Near to the Knuckle and Yellow Mama, and dark fantasy Black Petals. Another fantasy appears in Calliope next summer.