“That ain’t freedom. You pussywhipped by the idea of heaven.” Gordo said, brown-eyed with crimson lines like blood lightning.

“You wildin’ son” replied Teka, as he took the last swig of Aguardiente, before shading in the letters on the brick canvas, behind the bodega on 64th St.

“Where God at tho?” Continued Gordo. “You pray and pray and believe in these stories. For what? Salvation?  That’s some stupid shit.”

Gordo reached in his Jansport bookbag and took out another bottle of Aguardiente. The anise flavored liquor made its way into three small porcelain cups.

“One for you, one for me, and one for the streets, cuz they be cold.”

As the firewater fished courage from the realms of Teka’s inner space, it brought flashbacks of the coffee fields, where he plucked berries by the kilos as a child. The land had been passed down for generations dating back to the revolution. It was supposed to be his birthright until when the guerrilla came like winter rain and took his parents into the jungles, never to be seen again. Teka saw his parents disappear into the dense vegetation from the tool shed near the chicken coop.

To Gordo’s surprise, Teka was already walking into the bakery, Colombian flag covering his face. Magdalena, the hostess was the only roadblock between them and the back room.

Gordo slapped her ass on the way out.

“Teka, remember, we ain’t trying to kill anybody. This my girl’s uncle spot. Let’s take the cash and bounce.”

Teka’s hand gripped the pistol like he gripped the plantains before slicing them. He was focused on the transformation.

The backroom was dimly lit and carried a cloud of cigar smoke that looked ready for rain. There were photos of Colombian mountains, coffee, lakes, and fincas, like the one Teka had grown up in. In the center of the room was a round table. On it was stacks of money. Counting it alone was an elderly man, Don Chucho, the owner of the beloved neighborhood bakery.

Sargento Sánchez stopped counting and reached for his pistol with the confidence of decades past, when he sequestered lands from peasants. Before his thunder could begin, Teka’s bullets were already on their way out of his body”

Gordo ran out the back room towards the front door only to be met with a bullet to his third eye. His yesterday’s exploded on the wall as his body surrendered to gravity.

Magdalena stood with a pistol in hand, smirking and winked at Teka. 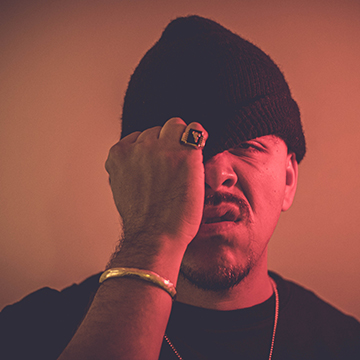 Lago Milagros is a first-generation Colombian-American originally from Queens, New York City. He is an underground Hip-Hop artist and photographer. Milagros is the author of Deadbeat Dios: A Book of Poetry and Rhymes. He currently lives in Phoenix with his wife and two kids.