Photograph memory is not a parlor trick. I’ll never forget a piece of music or a passage in a book if I read it just once. In dental school it allowed me to coast in the classroom and me to spend my nights playing guitar in a blues band that had a gig in a biker bar.

The bikers yelled out requests, the hell with a set list. I’d “see” the music in my head, call out the changes to the band, count it out and we’d nail it. The bikers took me under their wing. I did them some favors. I knew how to clean a wound, stitch it up and, most importantly, keep my mouth shut. All this to explain that I know more about the world than the average middle-aged man who lives in the suburbs.

I have a solo dental practice and a daughter, now 35 now. Fifteen years ago, she was attacked in the hallway at her first apartment in a town about 40 miles from home.  I found my her when I drove over for dinner at her place. A man had come up from behind as she was unlocking her door. He beat her face, took her purse and laptop. He ran past me as I was coming up the steps.

The cop filled out his report for what he admitted was a low-level case.

My daughter was a statistic. There are no simple crimes. Something changes within your soul. I watched it happen to my daughter. But she’s doing fine now and has a wonderful life.

Two weeks ago, when I walked the front desk at my office to talk with the receptionist, I glanced into the waiting room and saw him. Like I said, I have photograph memory. My receptionist told me he was an out-of-town salesman staying in a nearby hotel. He had a toothache. The concierge referred him to my office, in a strip mall just down the block.

Fifteen years later, that face sitting in my waiting room thumbing through a two-month-old magazine. My next patient wasn’t due for an hour, so I told my receptionist to tell the man I’d see him right away. I returned to my examination room.

Long ago, the bikers taught me about taking care of business, which means just what you think it means. I play golf on Saturday, enjoy fine wine and own a $5,000 acoustic guitar. No one in my crowd, not even my wife, knows about the lessons I learned in that biker bar.

I heard a knock. The receptionist introduced me to Paul Rogers. He settled into the examination chair. I used the overhead light to shine onto his face, into those blue eyes and the distinctive features I never forgot.

He told me one of back teeth on the left side of his face ached. The same side of the face where he beat my daughter.  He opened his mouth. I saw the problem. I said I’d numb the area and get to work on the abscess.

I injected him with the painkiller, not to ease the pain by his tooth, but under his tongue. In five minutes or so, it would make it impossible for him to speak.

I slid opened a drawer and laid the tools of my trade on the table: A drill, a scaler and a curette as well as probes, sharp and thin. I packed the sides of his mouth with dental cotton.

I got to work. 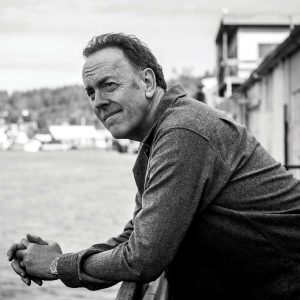 Tom Hallman Jr., a senior reporter at The Oregonian, has won every feature writing award in the business, including the Pulitzer Prize for Feature writing. He is the author of four books and his articles have appeared in Reader’s Digest and the Saturday Evening Post. A former police reporter, he has started writing mystery/crime fiction. This is his fourth published piece.