King Asshole keeps banging on my door, ringing my bell. This is my house, he shouts, especially when I ain’t getting no rent neither. I want to point out his English is way off. How can I trust his accounts if he inserts so many negations into a single sentence? He’s never liked my questions. Still, I keep tossing them at him like a pair of dirty undies. It freaks him out, gets him waving his arms around like he’s trying to signal an alien UFO. They’d be disgusted in humanity if they ever beamed him up. A probe would do him well though, pushed far enough it might even give him a spine.

That’s a body part missing from all the landlords I’ve had dealings with. With whom I’ve ever had dealings. That’s the kind of sentence structure I feed to his royal highness banging on my door. This is his kingdom and it was built on broken promises. He doesn’t stop with the noise, punctuating incorrect idioms with his cursing. He knows I’m in here. I’m right on the other side of the door, hanging out on my haunches, blowing the foul stench of my cigarette through the gap at the bottom. I know he smells it, rising up to meet him. It’s the opposite of what a smoke signal is meant to do. This is a big fuck you and I puff in and out hard to throw a few exclamations onto the end of my message.

I move to the table in the living room, tear off a ragged piece from the bottom of some bill I’m never paying. No pen. I dig through my bag and find a blunt pencil. I push in hard, puncturing the page with the first touch. It’s poetic. The pencil is mightier than his fists that have got to be hurting now from all the banging.

I scribble on the paper against the door: It’s shape up or ship out. And that doesn’t work because we’re hundreds of miles from water in this arid wasteland, you dumb fuck. I send the note out with the smoke.

His raging halts. I can feel the tug on the other end of the page. I hold onto it a little longer so he has to fight to read my riposte. I let go. So does he. He’s seen enough to get the message. The note lies limp, neatly bisected on either side of the door. A beautiful metaphor of this daily war we wage, a symbol of our stark differences. The great wooden barrier that keeps us engaged and separate all at once.

Sometimes I think I’m good for him. We’re good for each other. Men without love need something greater than themselves. Neither of us saw any value in the gods and I haven’t found a need for my reclining Buddha since crashing it through his car windshield. He doesn’t know it was me, but he’d put money on it. And that’s saying a lot for King of the Tight-Fisted Bastards.

My sentimentality is cut open as a shining axe head splinters through the door. He struggles to pry it free and, when he does, he swings another half arc into the wood. I’m frozen. He’s lost it. He’s bashing in and out, the holes in the door pockmarking like a teen’s face tormented by acne. He stuffs one arm through the debris and unlatches the door. He’s inside now. Axe in hand. I figure this is the grand entrance. His message with exclamations. He’s got my fucking attention. He lifts the axe and steps within my reach. My senses make out the blunt wood in my hand. He lunges. I swivel and push the pencil into something. I tense up waiting for cold steel to hack open my head, take off an arm. He’s screaming, thrashing around like a … bull. The pencil’s gone right into his eye. You’ll get your money, I mumble, as I race to my car. It’s a hard town. I need time. 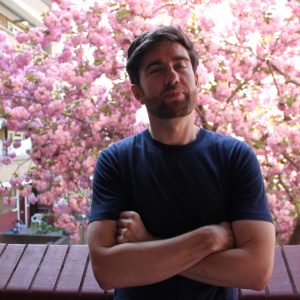 Bradford Keen once called himself a comedian, but found the pen mightier than the mic. And the feedback less immediate, which is nice. These days, when not working at his day job, he writes fiction that blurs humor with despair while contemplating how to leave the big city for somewhere greener and quieter.