“She was a whore,” Davis said. “Just like all the others.”

His head lay against the oily wood of the ancient church bench inside the confessional. It was saturated with the reek of decades of burned incense.

“And labeling her makes it alright?” The priest asked.

“She was Chinese. That’s a label too, huh? My little China girl. Like the Bowie song. I used a steel meat tenderizer on her.”

“No,” the priest gasped.

His shout echoed off the cold stone walls of the old church until they died.

The priest groped in the dark for the door handle. He wondered if he could escape before the maniac could catch him and bludgeon him on the floor with his serrated mallet.

“Absolve me, priest,” Davis whimpered. “I can’t help myself.”

“I-in the name of Christ…I absolve you.” His fingers found the groove of the door’s edge and then touched cold metal.

“What are you doing over there?”

The metal that the priest touched was a hinge. After all the times he had opened the door in the light, why couldn’t he find the handle in the dark?

At last, the priest found the doorknob.

“Don’t kill anymore girls!” He shouted and burst out the door.

It seemed impossibly dark without the light of the votives that once burned in the alcoves. It was like God had struck him blind for granting the killer absolution.

He stumbled through the pews in the pitch dark until he found himself crawling under one of them, trying to hide. The maniac’s laughter was amplified by the cathedral ceiling as the priest curled himself into the tightest ball he could make and held his breath and waited.

After several quiet minutes, the priest knew that he was alone again. He felt it in the emptiness of the darkness that surrounded him. But he also felt the absence of the Holy Spirit, Who had once filled every crevice of this once holy place and protected him.

The skinny junkie scratched her arms and followed Davis up the stone steps. He promised her the best fix of her life in exchange for her services.

Glenda didn’t care if she was paid in cash or smack. She would spend the money shooting up anyway; might as well cut out the middleman.

“Nobody comes here but the priest; and he won’t bother us tonight.”

“Guy’s a friend of mine. He’s cool with it. Look, he bought new candles for us.”

Votives flickered in the alcoves of the abandoned church for the first time in years. Their light danced colorfully in the few stained glass windows that hadn’t been smashed out.

The intense look on Davis’s face was unsettling. It momentarily stirred a sense of alarm in her that had been long dulled by drugs. Then the charismatic smile came back and he tugged her hand.

Maybe he wasn’t lying about the priest; he did have a key. The wooden doors creaked open and Davis pulled her inside.

Glenda crinkled her nose as she was pulled down the center aisle like a reluctant bride. There was a bad smell beneath the bottled up, musty odor of moldy wood. It was the rotting death smell from the bodies that Davis had stuffed away in the sacristy and choir loft.

She started to choke on the stench and covered her mouth.

“Wait! I want you to meet my friend, the priest.”

Davis smiled and opened his coat, revealing his clerical collar. Then his face contorted like something was coming through it, and the priest spoke.

Glenda pulled her arm again, but Davis’ grip tightened more as he reached inside the coat with his other hand and pulled out the steel meat tenderizer. 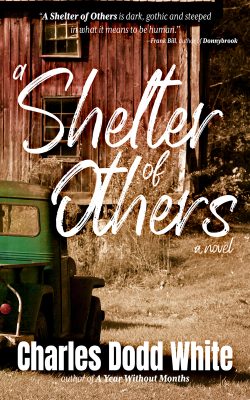