He met her the first time at Otto’s. Payday Friday, he wanted to meet her again. A date he’d call it. A short drive from the plant after showering, slap on the bay rum. “Someone’s getting some tonight?” He grinned, blushed. Anders shrugged, a young twenty-five. She wouldn’t expect him.

The wind barreled off Lake Superior, greasing the iron footbridge high over the railroad tracks with ice. A perilous walk to the lot where his Starlight coupe sat. He’d tuned it up just before winter clapped down. She’d get a cozy ride home. Anders was mindful in some respects.

Otto’s, red and yellow neon over the front door, snow ghosts blowing past the streetlights, hunkered down in the chiaroscuro of moonlight, streetlight, snow, and the wooden railroad trestle running out to the harbor and docks.

Anders looked around, pulling off his stocking cap, lined choppers, unzipping the heavy red-and-black plaid jacket. Somebody had plugged the Wurlitzer with coin. Patsy Cline sang “Walkin’ After Midnight.” He looked for Marcella’s Lucille-Ball-red head. In that booth? No.

He ordered a sip and snort from Raymond, slammed home the warming shot. “Say, you seen Marcella tonight?”

Raymond cocked his head. Anders knew he was nowhere near a halfwit. What, did he have to slip him a sawbuck for information, like he was a movie detective? “That leggy redhead?”

“But I just came on at six.” The Hamm’s clock on the wall read 11:18. “Not to say she wasn’t here earlier. Uncle Otto was tending bar then. He’d know. But he’s probably sleeping now.”

Nodding, Anders swept the barroom again. Three couples slow dancing. No Marcella. He turned back. “Set me up. I’ll be right back.”

He hit the john. Stomach wobbles. He situated himself on the throne just in time.

Belly settled, he noticed an expensive cigar-brown overcoat hanging from the door. Anders checked its pockets, looking for some identification. Leather gloves, a pack of cigarettes, a matchbook, and an envelope with First National Bank printed in the upper left corner. It was thick with cash.

After splashing water on his face at the sink, drying off, he pulled the envelope out of his pocket. Opened it again, thumbed the bills.

He glanced at the door latch. Locked. He pulled the wad out, counted it, then he recounted it. He looked in the mottled mirror. He wasn’t dreaming. He counted the bills a third time.

Each time, the figure was the same.

Ten thousand dollars. More than he made in two years.

He shoved the envelope inside his shirt, tucked low beneath his belt. He walked back to the bar and pulled on his jacket.

Raymond, at the end of the bar, gestured come over. He wouldn’t look Anders in the eye. “Okay. I saw Marcella. I saw her leave.”

Raymond polished a slice of bar top real estate. “Yeah, she was talking with Mr. High-Life. Hinckley, the bank VP.” The name meant nothing to Anders. ‘Bank’ did. “They were getting hot and heavy in a booth back there. Fucking redheads. Even that one, what you seen when you came in.”

“They left like they were going to make Hot Springs tonight.” Raymond rolled his eyes. “The dick-for-brains didn’t even wear his overcoat. He’s probably hopping her in his car right this minute.”

“I’m not going to do anything to him.”

The wind still blew. Anders spotted the banker’s ’56 Cadillac in the lot. It stood out. It glared.

He walked alongside, his shadow not falling across either occupant. High-Life, eyes closed, leaned back in his seat. Marcella’s head dipped in his lap like a drinking bird toy.

Anders moved off into the trestle’s dark shadow, a hand in his coat pocket pressing against the ten thousand.

The Cadillac action dropped off. Anders walked to his coupe, figuring, the three of them, they each got their payday. 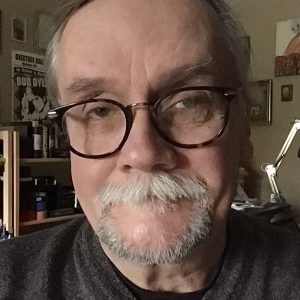 Jeff Esterholm’s work has previously appeared in Shotgun Honey, and Akashic Books’s Mondays Are Murder, Beat to a Pulp, Close to the Bone, Crime Factory, Mysterical-E, Mystery Tribune, Pulp Modern Flash, Rock and a Hard Place Magazine, Tough, and Yellow Mama, as well as in Midwestern Gothic, Cheap Pop, Regarding Arts & Letters, Wisconsin People & Ideas, and Flash Fiction Italia. He received the Larry and Eleanor Sternig Award for Short Fiction from the Council for Wisconsin Writers in 2013. He, his wife, and their goldendoodle hellraiser live in Wisconsin at the head of the Great Lakes.