It was dark when I got home and parked the car on the patch of gravel in the front yard. I could see my boys sitting on the couch, each one playing on their separate tablets, their heads leaned forward, long black hair loose and messy. As soon as I parked, I pulled out my nearly empty pack of cigarettes, even though I saw my oldest boy standing up and looking outside. I lit the cigarette anyway.

Mr. Warren had kept me at work late talking. In another ten years, I might settle for a man like my older boss, but I wasn’t ready to marry someone who did nothing for me below the belt. I was tired and anxious and not in a mood to talk. But he liked me and he was kind and unmarried and as long as I sat and listened, I didn’t have to clock out.

Me and the boys had spent the long weekend at my mom’s house helping her sort through my dead father’s belongings. I half wondered if the boy’s dad, was trying to sneak back into our lives. He’d asked if he could stay at our house while we were away because he was having his apartment sprayed for bugs and when we got home late Sunday night the front room and kitchen were cleaner than when we had moved in. A rented carpet cleaner sat in the back of his truck and he was gone to return it to the Winn Dixie before I’d even been able to manage a shocked “thank you.” Today, though, he had texted and asked if he could bring me and the boys dinner seeing as he thought he forgotten something important at the house, anyway. I’d ignored his text until finally he’d said he’d come by after the boys went to bed and maybe we could talk. I was pretty pissed that he was breaking one of my rules about visiting, but he ignored my response to that.

I pinched out the cigarette and leaned over to open the passenger side door. It wasn’t that Edward didn’t know I smoked, but I had promised myself I wouldn’t smoke around my kids. In fact, I only ever smoked in the car alone, anymore. That was another one of my rules. Me and the boys had a lot of them. Rules kept CPS from coming to the door, kept Eddie and his little brother John safe, kept me from taking their broken father back, as if living with him wouldn’t eventually turn back into raising another kid and be 1000 times worse than secondhand smoke. If Edward was coming out of the house before I finished my driveway smoke, what he had to say wasn’t going to be good.

My heart started to pound in my ears. I rolled up the windows and turned on the air conditioner to pull the smoke out of the car.

Eddie sat down in the passenger seat and stared ahead, his hands in the black jacket his father had left behind. It was too big for him and the jacket had been too small for his father the last time he’d left. It was one of the few things John, Sr. hadn’t taken with him, figured he’d only left it behind because it was one more thing he’d decided he needed in his life less than he needed drugs and high times, less than he wanted me and the boys.

“Well?” I said. I turned and looked at him. I was trying to be patient, but I was feeling that unfinished smoke.

“You break into the laundromat money?” I teased, half serious, though.

He shook his head. “No,” he said. “We went fishing for change. I found a magnet when we were walking home from school. I tied it to a string to get those coins out of the furnace.”

The gas floor furnace with its gridded metal cover didn’t work anymore. The landlord had told me that when it turned cold, we’d need some space heaters. The land the house was on had once been part of a Cherokee allotment just outside of Snake, Oklahoma, and had only, recently been returned to Cherokee jurisdiction, legally. For years I’d been telling people the Cherokee didn’t have a Reservation, it was all allotted land, and then one morning I woke up in a white man’s rent house on a Reservation in Oklahoma, an Indian on land that was once more, legally, Indian land.

“Anyway,” Eddie continued, “I was letting John use it to fish for coins in the couch and it got caught. So, Johnny reached into the couch, and,” he paused and pulled a plastic produce bag from his pocket and held it out to me, “he found this.”

I took the wadded up plastic bag from him. It felt like it was wrapped around a baby carrot.

I started to unroll it and Eddie said, “Don’t open it, Mom. It smells.”

I flattened the bag out across my lap and looked at the last two knuckles of a bloody finger.

“I told Junior it wasn’t real.”

“Pretty sure it is, though.”

“I’m pretty sure you’re right.” I felt a little queasy and I rolled down the window. “Open the glove compartment,” I said.

Edward did. I tossed the bag in and he closed it quickly.

“Why do you think there was a piece of a finger in our couch, mom?”

I thought of the texts from his dad, a guy I’d known most of my life, and I shrugged.

Eddie nodded. He opened the car door and got out slowly. But then he sat back down and pulled the door shut. He reached over and rolled down his window.

I lit the cigarette and blew hard away from the car. I was thinking about the black light their dad had left behind along with his metal band posters and the jacket Edward was wearing. I wondered what I was going to find in the dark of the living room when the boys went to bed. I doubted a finger was all my ex-husband left behind. 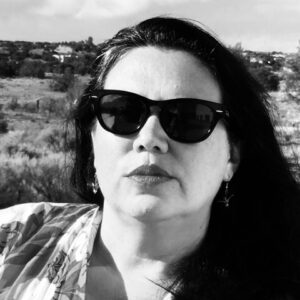 Andrea Rogers is a writer (Cherokee) who received her MFA in Fiction from the Institute of American Indian Arts. She grew up in Tulsa, Oklahoma. Andrea is a PhD student in English at the University of Arkansas in Fayetteville. Her historical fiction book for children on the Trail of Tears made the NPR best books list for 2020. She is currently working on a collection of Literary Horror.