by B. Clay Moore

What had he done with the flowers?

A — what. A rabbit? Maybe. Or maybe a pair of fingers. Flashing a peace sign.

No — a rabbit. Definitely a rabbit.

His chest felt wet. That was a thought he had. He tried to take a deep breath, but the wetness seemed to tighten around his lungs like — what.

When he was a child, his mother used to take a hot washcloth and wipe his face with it before bed. The cloth would feel heavy as it clung to his face, but in his memory it was always a soothing heaviness.

That’s what the wetness felt like. But why would it be soothing? Why would something that had clearly done catastrophic damage to — to parts of him. Somewhere under his shirt. Why would it soothe?

The rabbit had vanished. In its place, a cake was slowly turning, gradually drifting apart.

He could feel the grass between the fingers on his right hand. The wetness in his chest had drawn all of his focus away from his fingers, but now he was sure he could feel the lingering ache that the repeated impact had caused when he’d fired his gun so rapidly. In a panic, really. No chance of hitting anything. Firing into trees and hoping the man shooting at him would run.

That’s what he’d been hoping. Thoughts of stopping the man as he fled had vanished once the bullets tumbled across the park. He’d never been shot at before.

The grass between his fingers. Why had — why was that important — what he felt with his right hand?

Why could he feel his right hand but not his left? For a moment, he had the absurd thought that he was lying on his left arm, and that it had simply fallen asleep.

But he could feel the grass poking through the back of his shirt. Nothing but grass and ground below him.

The wetness was spreading into his lungs now. He didn’t even bother trying to draw air into those lungs. Instead, he took several short, quick breaths. The warmth was spiked now with icy pinpricks, somewhere in those rattling lungs. No longer soothing.

The flowers. Think about the flowers. Not expensive flowers, but he knew she’d love them, because — flowers weren’t a thing he did. All those times he’d gotten angry because he felt she needed things as proof of his love. And he never thought things proved affection.

He flexed the fingers of his right hand, hoping he could gather the flowers and hang onto them when they took him — took him where, though? To an ambulance, probably.

He felt his fingers scrape only grass. Not flowers. Jesus, of course not.

He’d left the flowers in the car. When he’d hit the brakes at the edge of the park before leaping out the driver’s side door.

Something was washing over him now — beyond the waves of cold and then waves of heat. Somehow pushing through the wetness, a crashing in his chest. A wave now of deep regret and love and sadness and of course it was never about the things. It was the thought behind the things. The extra hour in his day spent focused on her and not his job or his woodshop behind —

He’d put her name on the card attached to the green paper wrapping the roses. He’d borrowed a pen from the man at the counter and written her name on the little square card.

The flowers — the flowers with her name on them would be found when they went through his car. The department’s car, but his car, too. His cigarettes. His wax coffee cup. His jacket with his wallet still in the pocket.

And her flowers. There in the passenger seat, with her name on the card.

The cake and the rabbit and the fingers flashing peace signs had all dissolved into one gray bank of drifting smoke, crawling across the sky above him.

And then there was nothing. 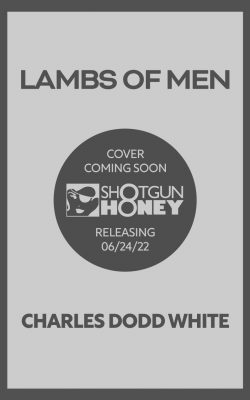