Johnny Maggio’s wife was having an affair. But a divorce was out of the question, as the Church frowned on such measures. Instead, Johnny chose to have this lothario rubbed out. The Church also felt rather strongly about murder, but this was a matter of pride.

The Romeo in question was Vinnie “Two Cats” Castiglione, a small-time hood with a gambling problem. Johnny wasn’t inclined to wade through all the dive bars, meth dens, and floating crap games on the West Side to hunt down some third-rater. Johnny gave the job to his lieutenant, Tommy Octaroro, plus fifty grand for Tommy’s trouble.

Through the wages of sin, Tommy Octaroro had achieved a prosperous life including a seven-bedroom, five-and-a-half bath, McMansion on the North Shore, a forty-eight-foot ketch moored at the yacht club, and a high-rise condo in South Beach. Tommy wasn’t willing to lose all that to eradicate some low-life who crossed the boss. Too many risks: cops, witnesses, a retaliatory lucky shot by Vinnie.

At Sunday family dinner, his sister Julie again whined to Tommy about advancement for her son Donny. The boy was good with numbers, but seemed to lack a certain malevolence necessary to succeed in their world. This was the kid’s lucky day; Tommy promised his nephew twenty-five thou and the opportunity to make his bones.

Donny Stillwell liked the idea of being a made man and all that came with it: the respect, the money, the ladies. Especially the ladies. But he didn’t want to have to kill someone. In almost all the fights he’d been in, going back to grade school, he came out the loser. And he was deathly afraid of firearms. But he was more terrified of his Uncle Tony, so he accepted the assignment.

But that didn’t mean Donny had to be the one who pulled the trigger. He figured to subcontract the work, enjoying all the benefits of the transaction, while avoiding any danger of physical injury.

He reviewed his list of underworld associates. The Dominicans were too hot-headed. The Nigerians too untrustworthy. In the end, he selected a pair of Moldovan brothers he worked with exporting stolen luxury sedans to Eastern Europe, and offered them ten G’s, to take care of Vinnie.

The Ceban brothers, Timur and Vadin, undertook the commission because they didn’t wish angering Donny and lose the franchise running misappropriated Mercedes to Romania. But the brothers were smugglers, not killers. Neither owned a gun. To perform the deed, they hired a recently arrived Armenian immigrant. The man had served in his nation’s special forces and was reputed to have assassinated of a rogue Azerbaijani General.

Sak Arakelian was eager to build a reputation in his newly adopted country and took the Moldovan’s deal. But he was still unfamiliar with America and didn’t want to make a fatal error with his first murder-for-hire. So he posted an ad on Craigslist under “Services Wanted.”

Inside the local bar, a man approached Arakelian, but did not sit. “You posted the ad?”

“Are you a cop?” Arakelian asked.

The man didn’t look like an American cop, at least the ones Sak had seen on television. His hair wasn’t perfectly coiffed. His teeth weren’t gleaming white. He didn’t wear the latest expensive fashions. “No.”

“How much?” asked the man who didn’t look like a cop.

The man nodded. “Who’s the target?”

“A hoodlum named Vinnie Castiglione. Do you know him?”

The man stiffened and blinked rapidly.

“Is that a problem?” Sak asked.

The man relaxed and shook his head. “I know where to find him.”

“Half now. Half when the job is done.” Arakelian slid an envelope across the table.

The man who didn’t look like a cop took the envelope, stuffed it in his jacket pocket, and departed.

In his car the man counted the money, punched the address of an Atlantic City casino into his GPS, and started the engine. From the backseat came a pair of high-pitched meows. He turned and reached with both hands to scratch their ears.

“Luck’s running our way, Girls. Get ready for a little road trip.” 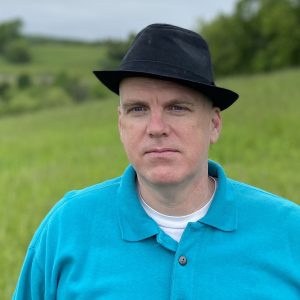 James Blakey lives in the Philadelphia suburbs where he works in Information Technology. His story "The Bicycle Thief" won the 2019 Derringer Award for Flash Fiction. Visit his website at JamesBlakeyWrites.com