Out here where the canal changes into industry, crushed cars stacked up behind rusty walls, out here with the empty warehouses, an upturned carcass of a dead fox, stiff with it legs pointing skywards, out here with silver capsules emptied of nitro littering the floor like corpses of a tiny alien invasion fleet, out here in dank water, supermarket trolleys far from home join a safe cracked open on the bottom of the canal, out here unwanted fools tied to the masts of darker drugs skulk in corners or kneel to turn a trick.

Out here, that’s where it was to be done, and he never knew, as I entered the storage unit at the back of the meat packing factory, never knew that the five thousand he’d lost at poker and owed to my boss had opened up a door to a new future without him in it.

I slid the knife down from the back of my jacket, judged the distance, the steps needed as he stood, his back to me, clipboard in hand, judged the sound I would make, the silence I would not disturb, the way he would go to sleep forever. Picked the point of impact, my hand ready to grab his mouth from behind, and then he turned and a friend I once knew, who had saved me and had never cashed in, looked back at me with pale blue eyes and I knew I was in at the deep end without a paddle to row back.

His face dropped, the clipboard dropped, there was a smile of recognition, then he looked down at the blade in my hand, and back up to my eyes holding his, a pop of noise from his mouth as he opened his lips and no word came out, chalk face now, drained. There was a gurgle from an overhead pipe, I could see dust mites behind him caught in a tobacco light from a chipped metal window.

A chewed biro, that had stayed wedged behind his ear, slowly careened forwards, like the Titanic gracefully accepting its fate. It fell to join the clipboard on the floor. I hadn’t heard that land, but I heard the pen, a tinkle of sound, brittle plastic. And I plunged the knife in and a hooter sounded for lunch break up in the rafters. He slid to me, held on the knife point, skewered as for a barbecue. I looked away as his eyes grasped for solace.

I wiped my knife on his tie and walked back to the canal, threw it in, stretched my neck, thought about going the races or getting a cold beer, but instead I went home, took off my shoes and trousers, lay on my bed and followed a crack in the ceiling with my eyes until it ended in the light fitting. 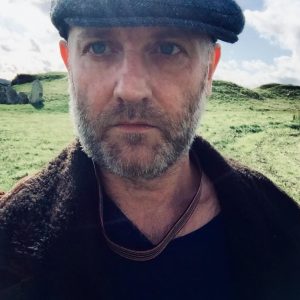 JC Davies is a writer based in London, UK, recently short listed for the York Poetry Prize, short story “Canal” published in Isacoustic, short story “Palm” published in Yellow Mama. He is an award-winning writer and director of shorts and a feature film.