Criminals are always supposed to be tough, right? Not be afraid of the repercussions of their actions, kick ass and take names, all that bullshit. I’ve been in this gig for over thirty years kid, and in that time I’ve come to realize that there isn’t a whole lot that scares me. I’ve been to prison, been shot at, the whole nine. But there is one thing, one man, that keeps me on my toes. Keeps me up at night sometimes even. Some say this guy is a myth, a legend that some fuckhead with an over active imagination made up. But I know the truth. I know all about Red Sheehy, and the night he made himself famous. How? Well, I was there.

Red was an alright guy, for the most part. Did what he was told, never really asked questions. Loyal, yeah, but also smart. Smart enough to start dealing on his own, on the side. Not smart enough to not get caught though. When the boss found out, well, he was more than angry. Red didn’t mean any harm, just wanted some extra cash on the side for him and his girl. But the boss did not take kindly to this. I think it was because of how good a trooper Red had been for those years. I think the boss saw him as a son kinda, and saw what Red was doing as the ultimate betrayal. Didn’t kill Red, but what he did would make any man wish they were dead.

Boss took him up to that place up state, in the woods. Beat the shit outta Red, and chained him up in that cabin’s cellar. The boss kept him alive, even had the doctor check on him regularly, especially after he’d have some of the boys kick the shit out of him, which they did just about every day. I think the boss even had some of them “have their way with him,” if you know what I mean. I didn’t mind at first what was happening. Hell, I even knocked him around a few times myself, just following orders. They kept him there for over a year like that, locked away in that cellar, putting him through hell. Killed his girl, brought her head to him in a paper bag. But the kid held on. Goddamn, he was tough for holding on like he did. But someone fucked up.

Red escaped. Some guys went up there one weekend, and I don’t know if it was their complacency or Red’s pent up rage that did it, but he got out. Killed them guys too. Found their heads smashed in, one even looked like Red tore his throat out with his teeth. Boss had us hole up after that at his mansion down here. There were 12 of us there that night Red came back.

He didn’t look like a man when I saw him, more like an animal. Didn’t have a gun or anything, just came at us barehanded, right through the front door. I tried bringing my piece up but he was just so damn fast. Had me on the ground, slamming my head into the floor before I knew what was happening. Knocked me out cold. When I came too, the place was burning. As I was making my way out I saw what he’d done. Them other guys, ripped apart. Guts were lying around, Jesus. It was a massacre. One man. Outside, on the fence, I saw something I aint ever going to forget. The boss’s head stuck up on there, like a symbol or something.

I know it doesn’t seem true. But I know what I saw, and it frightens me. Why did I survive? I don’t know. Maybe he let me go just to tell his story. Maybe I just got lucky. Maybe he knows I’m still alive, and he’ll come back. I hope to God not though. A lot of folks think love is what drives a man to do great and terrible things. After that night I realized it isn’t love, there was none of that in Red’s eyes. It was hate. Only hate. 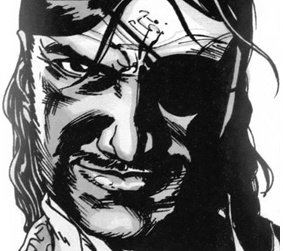 Phillip James Marker was born and raised in Wisconsin for starters. After high school he joined the Marine Corps,  after 5 years of service he attends college and works in Wisconsin. Free time allowing, Phillip watches a lot of movies, writes short fiction and has been known to draw. He drinks and smokes, Marlboro Reds if you have them.