The engine of Mayfield’s cruiser spooked the foxes. They fled from the jaundiced yellow light of the porch, their lithe bodies bolting into perfect dark. There was no need for blue lights or siren. It wasn’t that type of call.

He made a point of putting on his hat—so as not to give the wrong impression – and stepped out into the cool night. Ed Hatton was crouched out front, scraping leftovers onto his lawn with the back of a fork. Two foxes skirted the edge of the garden, eyeing the scattered meat.

“I don’t know why you’d draw them on yourself like that,” Mayfield said.

“All I got for company.”

Hatton choked the handle of the fork.

“She wasn’t in it, but there was a letter on the passenger seat.”

Mayfield paused in the doorway, watching the foxes move stealthily towards their meal.

Inside, Hatton searched the cabinets like a stranger in his own kitchen. He had the look of a boxer waking up on the canvas with no idea how he got there, reaching out for something to steady himself. It was the same bewildered look Mayfield himself had worn for months after he found his own wife Charlotte in her car with the needle still hanging limp from her arm, her eyes wide and lifeless, staring at all she had left behind. He had done everything he could to help her off the dope, everything short of strapping her to the bed, but it wasn’t enough.

Hatton abandoned his search for a cup and instead lifted a bottle of Jameson from the counter top and drank from the neck. They took their seats at the kitchen table and Mayfield handed over the letter. Tremors ran through Hatton’s hands as he read.

Not long before she disappeared, Mayfield had arrested Lisa Hatton. Heroin: the shared pain of these two men.

When Hatton was done reading, he tossed the letter on the table. “You read this?” he asked.

“Had to. Like it says, she’s probably gone somewhere to clean up. There’s every chance that when she gets her head straight, she’ll just walk in the front door.”

“How many times have you seen that happen?”

Hatton rose without a word, and took the bottle of whiskey with him down the darkened hallway. Mayfield sat in the silence of the kitchen for ten minutes before he got up and left.

Two months before Charlotte overdosed, she kicked the dope. For days, she locked herself into their bedroom and howled and retched at all angles of the clock. When the worst of it had passed, she paced the front deck, sipping delicately from cup after cup of chamomile tea, “To draw out the rest of the toxins,” she said. And for a while afterwards he had her back, the woman he had married. Light and breezy, with that mischievous smile of hers. He didn’t know she had slipped again until she was beyond saving.

Later, as Mayfield waited by his own kettle, watching steam billow and fade, he ran through all the angles. The forensics report on the car wouldn’t be in until Monday, but he was pretty sure it would come to nothing. Same for the letter.

As he crossed his back garden, thin spatters of rain rippled the surface of the cup he held. The grass shone blue in the moonlight and he thought of the foxes, how at ease they were in darkness, how they adapted to thrive in it. Before unlocking his shed, he took the ski-mask from his jacket pocket and pulled it over his face.

The festering stench of the vomit bucket almost forced him back out the door. Lisa Hatton lay curled around it, drowned in cold sweat and too weak for any more screaming. Her right ankle was bound by a chain to a water pipe. He lay the chamomile tea beside her head.

“Your colour is coming back,” he said.

Her eyes flickered from a fitful, tortured sleep, “I want to go home.”

“It’s okay,” Mayfield said, “you’re nearly through the worst of it.” 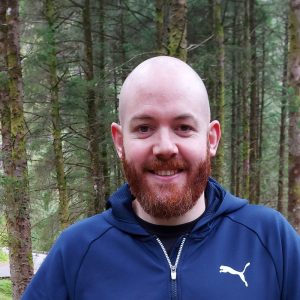 Stephen Brophy lives in Cork, Ireland with his fiancee and two sons. His work has appeared in Clay Literary and is forthcoming in Bandit Fiction. He is currently working on his first collection of short stories. You can find him on Twitter @sbrophy85.