I’m old-fashioned. “Your word is your bond,” “Don’t say nothing you can’t take back,” all that crap. I stand by my people. But then again, I also like having a drink or two. And sometimes the booze makes my words a bit loose, and my standing a bit wobbly. That’s how the reporter got me to talk in the first place.

New mayor coming into town, wanted to add all this technology into the City Hall. Digital records, fingerprint security scanners, and putting stuff “in the cloud” (whatever the hell that is). The whole thing would cut the workforce in half. All in the name of efficiency.

As the head of human resources, and the one who would have to fire everyone who’d be cut loose, I know efficiency doesn’t mean jack when people lose their jobs. But if the boss wants something, he gets it, so I stayed quiet in the office. The mayor’s good graces were all that kept me employed after he beat my last boss in the election. I didn’t need to give him or his staff a reason to fire me.

The bar was packed on Friday. Cheap beer and a friendly bartender had me ready to drink all night. I didn’t realized I talked to the reporter until Saturday morning.

“I just wanted to thank you for speaking with me last night. Your comments were very insightful into the mayor’s new initiatives,” he said. Little pissant was common around City Hall. Would sell any piece of information as truth, even if it wasn’t.

“Quote, ‘The whole thing is about efficiency. Efficiency doesn’t mean jack when people lose their jobs. It’s a stupid idea to begin with,’ end quote.”

A small silence hung on the phone before he dropped me: “I have a recording, sir.” He played my voice back over the phone. I was sunk.

“Can we talk about this? Is there any way I can amend what I said?”

“You mean to take it back? Not an option. I don’t do corrections just because it makes you look bad.”

Of course you don’t, you little shit, I thought. Why would you care about someone else’s reputation? Another idea came to mind: my words won’t get out if he can’t publish the story. “I don’t want to take it back. I want to give you something more.”

“Meet me out behind City Hall. In an hour. I’ll give something to really sell the story. Come alone.”

I didn’t have much time. I didn’t need it. City Hall was my second home. I knew every office, every phone, every security camera. There was a blind spot behind the building. I took a ballcap, a hoodie, and a piece of rope.

The reporter met me with his phone out, ready to record. “Put that away,” I told him. “I’m not talking. I’m giving you something.”

A sharp right hook bent him over. My knee slammed into his nose. He was dazed and bleeding. My hands slipped the rope around his neck. Pulling hard at the ends, I dropped him towards my waist. More pressure on his throat. His hands flailed, trying to hit me. I held firm, pulling until he stopped flailing. When he was still, I snapped his neck.

Looking at his busted face and bruised throat, I thought, Job well done. I took his phone from his pocket and smashed it with my bootheel. The rope was in my pocket, ready to be burned at home.

I left the alley, worried only about hiding my face from the cameras covering the side door of City Hall. Hoodie up, I reached my car knowing I was in the clear.

So, imagine my surprise when the Sunday papers had the reporter’s story, with my quotes and my job title. My phone rang and the answering machine picked it up. It was the mayor. I didn’t hear what he said. I was too focused on an editorial note: “Due to our reporter’s death, this article was reconstructed from interviews uploaded to this newspaper’s cloud server.” 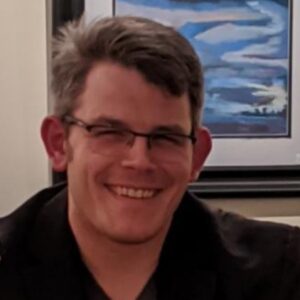 N.B. Turner is a writer living in Virginia, remembering and trying to honor his time growing up along the Great Lakes. He’s published short fiction in Hoosier Noir, Shotgun Honey, and Rock and A Hard Place Magazine, as well as poetry in The Daily Drunk and Punk Noir.  You can follow him on Twitter at @NathanTurner15.