Mel glanced nervously at his watch and settled his eyes on the Chalmers Topaz in the Gem Room on the second floor of The Field Museum.

The 2.5-lb., 5,899 caret topaz was almost comically oversized but still incandescent in the light. It refracted that bright multi-colored fire you’d often see in diamonds.

Mel stared vacantly. It was the biggest stone he ever saw.

“To hell with it,” he muttered, driving his fist through the glass, snatching it up.

It went down just as he expected with a loud blaring alarm and flashing lights. He wondered at the last minute if it would be a silent alarm but it was as over-the-top and theatrical as he first assumed.

He made a run for it, jostling past slow, shuffling museum-goers and plowing through two security guards, his days as a high school fullback coming in handy.

As he came upon the stairwell, he was confronted by a phalanx of guards he knew he couldn’t muscle past. He turned and saw his out: the pterodactyl hanging from the ceiling. He vaulted himself over the railing and crashed onto the plaster dinosaur. As he assumed, it was too flimsy to support his weight. The supporting cables snapped.

He rode the pterodactyl about 30 feet down. It broke his fall, but the impact was violent. He staggered back onto his feet. He straight-armed a small guard that rushed at him and saw daylight clear unto the exit.

So many guards had rushed upstairs and he outstripped them all by making a crazy leap downstairs. It might have given him just enough time and enough of an advantage to make it outside.

Mel knew even if he made it outside, he could never escape. It was a dumb heist, a smash-and-grab at a major metropolitan museum that was inevitably doomed to failure. You might as well try to rob a police station. But the real score was five of the hot dog carts on the bustling museum campus during a sunny summer day when it was clogged with strollers and tourists eager to fork over cash for an authentic Chicago dog. Ed and his crew as sticking them all up simultaneously while Mel provided a diversion. Mel was only providing a distraction that would send him to prison for a couple years because he was into Ed for 80 large after the Patriots failed to cover the spread in the Super Bowl. He owed Ed big-time and you didn’t owe Ed.

Mel knew he’d never get away, not in a million years. But if he could just make it outside those heavy bronze doors, he’d have some small moral victory. He could relish that he pulled one over, nabbed a minor triumph over a system so rigged against him.

He was almost there, so tantalizingly close to shoving the door open when the first bullet caught him in the shoulder. The hot metal sliced through like a pate knife through a cheese ball, spinning him around. The next two bullets missed, but he dropped the Chalmers Topaz.

It clattered to the floor, skittered off. He worried for a minute it was chipped, damaged. But it wasn’t even what he was really there for anyway.

To hell with it, he thought as he staggered back outside the door. He could feel the cool wind off Lake Michigan. The sun was so bright. Everything was awash in color.

He could taste the faint marine tang of the lake air. He was free, at least for that moment, free.

He stumbled down the steps as his shoulder bled profusely.

He plowed past a scrum of tourists toward the lakefront, when Ed’s muscle Doyle pulled up on a motorbike.

Mel’s heart swelled. They’d get away. He’d make it home after all.

Mel opened his mouth to respond when Doyle whipped a .45 out of his leather jacket and shot him three times in the chest.

As he lay there splayed on the steps, Mel could catch a glimpse through the windows at the dinosaur bones in the museum lobby.

A thought started to form and then dissipated in that lake breeze. 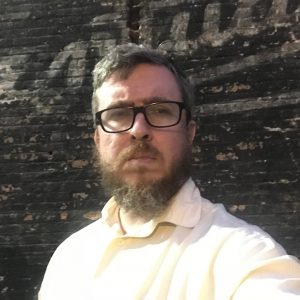 Joseph S. Pete is an Iraq War veteran who grew up outside of the then-murder capital of the United States: Gary, Indiana. He still lives in the Region, where longtime politicians routinely get taken down for multiple felonies and where a man who shot up a mobile home park over a pound of stolen pot tried to hail a getaway car through Uber. As a journalist, he once wrote about a jazz club where seven people were shot one night. It's still open.