It’s all about Billy. My little brother. It’s always been about Billy. From the moment he squealed for the first time in the arms of the doctor. He was a much cuter baby than me. A full head of spiky black hair and a small upturned nose. I emerged from Mom as bald as Jean-Luc Picard with a nose to match. We evened out in the looks department eventually but first impressions linger. Mom and Pop were in love with Billy, and I was big sister blah. When it came to brains, the pendulum swung. Don’t get me wrong, Billy is not stupid. Let’s say that his confidence outpaces his smarts. Ergo, he makes mistakes. Mistakes that got more serious with time. Borrowing golf carts for a joy ride and ditching them in a water hazard is a youthful prank deserving a scolding; breaking into pharmacies falls in a different category. The kind that gets you locked up.

Billy stayed put after his release, meaning he got his wings clipped, meaning he was cautious.

For a short while.

Now it’s all about Billy again.

Mom is sobbing. Pop stands by the patio door, hands deep in his pockets. He looks like Billy when he’s forced to listen to something he doesn’t want to hear.

“He needs a good lawyer.” No, he needs a brilliant lawyer. Billy really stepped in it this time.

Busted in the middle of a drug deal with enough powder to fuel a monster party, ten kilos of cocaine in his spare tire, a bloody machete in the trunk, and a girlfriend too stoned to comprehend what was going on.

“Crime of passion,” Billy said. The only words he said.

It might have worked if he hadn’t stolen the dope after swinging the machete at the meth cooker’s neck – the guy was banging the girlfriend, Billy had reasons to be upset. But what really sank the amorous defense was Billy going straight from the meth lab to the sales meeting. My brother sure understands efficient time management, farm to table sort of, from producer to consumer.

Let’s not kid ourselves, it was premeditated murder.

Me. A high school teacher who can’t parallel park to save her life. Get Billy out?

“You’re the smartest cookie in the jar,” Pop says.

After ignoring me for thirty years, now that the golden boy is in terminal trouble, I get this ego-stroking compliment? Gee, thanks Pop.

He shakes his head no-no. I know what he has in mind. Pop ran with a colorful crowd after he came back from Vietnam. He was lucky he never got caught. Maybe it’s bugging him, that he might have used up all the family’s good fortune, not leaving enough for his beloved son to get by.

“I called old friends, Lys. They’ll be here soon. We’ll brainstorm. You’ll tell us if it can be done.”

Six months later, I’m waiting for Billy by the Amistad Dam. I can see the border post from here. Pop got the passports and they’re impeccable. His network of contacts is first rate. He never told me what he did in Vietnam but it sure wasn’t crawling in the mud. I withdrew money and closed my bank account. Pop and his friends contributed to the war chest. Enough to get situated. I wanted to be with the team waiting for the corrections van that transported Billy after court but Pop forbid it. One child in harm’s way is enough, he said.

Two and a half hours ago I got the message.

They won’t be long now. It’s pretty here. Blue water, prickly pears in bloom. A roadrunner dashes across the parking lot. No Wile E. in sight with or without a stick of dynamite.

I take it as a good omen. 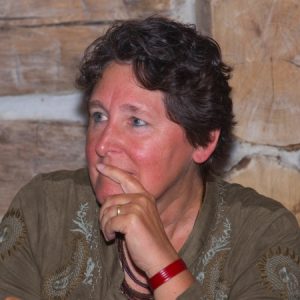 M.E. Proctor is currently writing a series of contemporary detective novels. Her short stories have been published in Close to the Bone, All Worlds Wayfarer, Bristol Noir, Tilde, Expat Press, The Bookends Review, Fiction on the Web, and others.