For four hours in the middle of the night, Erik motored his 32ft Bayliner recreation boating vessel from Commencement Bay to Totten Inlet. Gnawing on the remaining nub of a Maduro cigar, he watched his plotter count down the way points around Hope Island until he reached the exact point he previously determined. Erik studied weather and tidal charts for the past week. The location was secluded with minimal traffic. The inlet held a steady fifty feet of water and would not see any strong currents. The hardest part of all was waiting for a night with heavy cloud cover to block out celestial light, mitigating the possibility of a witness from shore.

The cell phone resting on the boats instrument panel buzzed with a text message:

IS IT DONE YET?

JUST GOT HERE. WILL KEEP YOU POSTED.

Erik dropped the diesel engines to an idle and tossed the cigar into the water. He found the hatch key embedded in the aft deck. Popping open the compartment revealed a lanky man in his mid-twenties, bound at hands and feet with manila three strained line.

“Come here, you piece of shit.” Erik lifted John from the centerline hold and placed him on the cushioned settee that ran along the port side. John grunted against a red ball gag cinched firm.

“Stay quiet,” said Erik before pulling a Ruger Redhawk snub-noise from his windbreaker. He gave a short chuckle, looking at the gun then at his hostage. At the sight of the weapon, John ceased making noise. “Oh, I guess it doesn’t really matter. I don’t care. Keep whining. Fuck it. Get it outa your system. You won’t have much more of a chance and there ain’t no one can hear you.”

John kept his focus on the gun as Erik paced the aft deck.

“This is your fuckin’ fault, you know that, don’t you? If you wouldn’t have been such an ass clown, then you wouldn’t be in this position. But instead, you had to fuckin’ beat my beautiful baby sister. You were her boyfriend. That means you were supposed to protect her not put her in the fuckin’ hospital. You know what the doctor said? He said the damage is so extensive that it’ll be a miracle if she remembers how to walk or talk or …” The thought cause Erik’s face to redden. “Fuck. I fuckin’ hate you. I don’t think I ever truly been able to say that until now. People say they hate something or someone but they don’t know hate. I know hate. I hate you.”

Erik stood still for a moment focusing his anger at a single point directly between the two unblinking eyes of his hostage. He wanted to bore a hole into John’s skull and fill it with all his hate, anger, and pain. A bullet in the brain would be the best he could do, though it seemed to Erik like his sister’s violator would be getting off easy. He took a long deep breath letting the night’s sea air fill his lungs and steady his nerve. “Alright.”

John’s eyes pled for repeal, but he remained silent.

Grabbing his hostage, Erik spun John around then he kicked the back of his knees folding him to kneel on the cousins he previously sat. With his free hand he forced his hostage’s head down so it hung over the water. With his other hand he pushed the muzzle of the Redhawk against the junction where spine meets skull. The boat rolled gently in the swell of the Puget Sound. 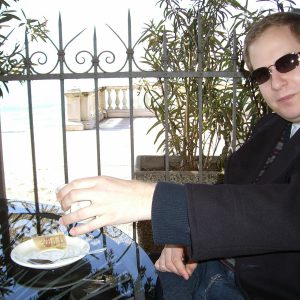