Ochoa’s water-pale eyes flash in the dimness. “You got it for me, yeah?”

He’s lying with his back against a cement pillar, surrounded by chicken bones and filthy needles. Junkie’s paradise, beneath the Cesar Chavez Bridge in South Tucson. Freeway sounds echo from below.

Huerta shows him the cellophane wrapper. Chiva. Black tar up from Sinaloa. She’s spent the better part of the past twenty four hours getting the money to pay for it, on her back, knees, and stomach. Mostly in cars, though a few tricks were willing to spring for a room at the Budget Inn.

“Ah, you’re still an earner. My little Huerta.” His hands are feeble, reaching for the stuff. He hasn’t eaten anything in two days. Just bottles of orange juice she brings him. His longest binge yet.

She stabs him in the throat as he’s unwrapping the bindle. An old switchblade she’s carried for years. The knife slides in easy, comes out with a gush that looks purple in the evening light. She leans back to avoid staining her cocktail dress.

Ochoa doesn’t make a lot of sound. He clasps a hand over the wound, but blood seeps around his fingers. The other hand’s still holding the chiva, like maybe he’s got enough time left for one final hit. Poor bastard. His eyes look the question before all the light drains out of them.

“Two years ago,” she says, “you beat me so bad I had to go to the emergency room at Kino. No reason but you were feeling mean. Probably don’t remember it. I had to walk eight blocks, and who’s going to help a bleeding puta? Your time’s been marked since then.”

An hour passes, the flies are buzzing, and she’s still standing there, switchblade in hand. Shock? More like panic. Everyone and their dog knows Ochoa’s her pimp. When the body’s found, the cops will come looking for her. And he’ll be found as soon as the sun comes up, if not before. Freeway traffic’s sure to notice the blood.

Impulsive. She should’ve just given him enough to OD. But she’s tried that already, and there’s not enough heroin in the city to fill the fucking sinkhole of his tolerance. Besides, she didn’t want him to go out that way. She wanted him to feel it.

She closes her eyes and utters a prayer to the patron saint of venganza.

A squeaking noise, from the bottom of the bridge.

She whirls, fingers white against the switchblade, but it’s only Chacon, the crazy old Yaqui, pushing his Food City shopping cart full of plastic bottles. He’s making his way up the slope towards her, his sun-rotted brain oblivious to Ochoa’s corpse. She lowers the knife.

“Que onda?” His wrinkled grin is all black gums.

“Just looking for bottles.” He peers past her. “Your man asleep?”

She’s about to tell him off, but then she realizes. The cart. The goddamn cart.

“Old man, this is your lucky night.”

When she and Chacon emerge from under the bridge, they’re both pushing the Food City cart, like there’s something heavy inside. All the bottles are gone. One of Chacon’s vomit-crusted blankets is wrapped around a large lump.

She knows a carniceria not far from here. A big old dumpster in the alley behind, with so much spoiling meat no one will notice the smell. If she hides it well enough, she can buy enough time to get to Nogales.

Huerta smiles. A night of vengeance and miracles, here in South Tucson. 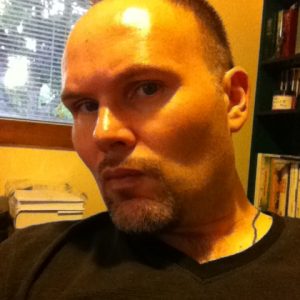 Garnett Elliott lives and works in Tucson, Arizona. He's had stories appear in Alfred Hitchcock Magazine, Thuglit, and All Due Respect, among others. Look for his shorts collection Scorched Noir on Amazon, as well as the soon to be released Borderland Noir anthology edited by Craig McDonald, featuring stories by James Sallis and Ken Bruen