You’d never held a gun on a person until that day, so obviously you’d never shot anyone either. The Smith & Wesson shook ever so slightly in your grip, your aim dead-center on our hit’s forehead. You were standing, he was kneeling—whimpering—in his fancy Spanish Colonial mansion in Henderson. A real monstrosity of a place. Your upper teeth bit into your bottom lip so hard it should have drawn blood, and beads of sweat flowed down your temples.

Driving over from Silver Sevens, you swore and sulked after I informed you this particular job would be more than a collection call. Like all assignments, this one came from the top. The hit was an oil tycoon, a high-roller who had taken something from the boss that wasn’t his to take and it wasn’t for you to question any further. He stole something, end of story. But you didn’t take this gig to kill people; it wasn’t in your job description. Like that’s a fucking thing in this line of work. Then you mentioned like a confession that you only took the job to provide for your parents and theirs. All of them living under one roof with you and your girlfriend and a baby on the way. You needed to keep this job, so you listened closely as the truth smacked you across your smooth face. A couple others before you had expressed similar reservations. Those who couldn’t step up had been taken for a drive to the desert, far from the twinkling lights of the Vegas strip. A shovels-clanking-in-the-trunk kind of drive. You knew what the job required when you took it, or else you were naïve to think anything otherwise when you shook the boss man’s hand. It’s not up to you to decide whose sins are forgiven with a few broken bones and bruises, and whose can only be absolved by fatal blood. No one cares about your circumstances. No one asks about your beliefs or morality; how you’ll deal with the guilt after every one of these kinds of jobs. You were told this would be your life’s work from then on and all you could do was get used to it.

Before sneaking over the stone wall encompassing the mansion, you stuffed the half-pack of cigarettes in your pocket for later. You didn’t smoke before, but you’ll make it a habit from now on. Helps soothe the nerves, you’ll find. And a few hard drinks at the end of the day dull the other lingering feelings, but at your age you’ll probably gravitate to weed.

At the front door, you stared at the rubber-gripped revolver dropped in your hands. The chrome barrel reflected your face as you rolled it over, this way and that, inspecting the modified gun like it was of alien design. You took a firm hold, cocked the hammer.

Inside, he wouldn’t stop begging, crying with no words at first other than please, please, please again and again. Snot snorted out of his nose. Tears splashed on his crisp, white dress shirt, blazing a trail of water splotches from his collar to his waist. His begging kicked up to groveling, then transitioned to bargaining. He’d give you anything and everything you asked. Girls. Money. A private security gig with his oil company, which seemed ironic given how easy it was to stroll undeterred into his living room.

None of it enticed you. Through it all, you stared ahead at him, not entertaining his pleas or promises. You must have finally come to grips with what you needed to do. Your hands had stopped shaking. You wiped away the sweat and measured your breathing. Adjusted your posture to project pure dominance. Yes, a switch had gone off. You exuded confidence like a true pro.

You continued to stare straight ahead. One-eyed through the rear sight, down the barrel to where his forehead came into view at the end of the muzzle. An enforcer evolving into a soon-to-be verified hitman. Cold. Unforgiving. Unwavering from what needed to be done.

So, it should have come as no surprise when you didn’t pull the trigger and instead turned the gun on me. 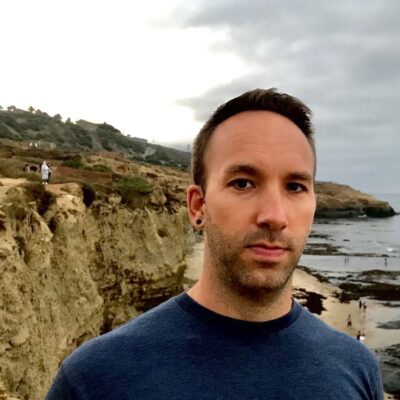 Curtis Ippolito lives in San Diego, California, where he works as a communications writer for a nonprofit. He is the author of Burying the Newspaper Man, a crime novel out now from Red Dog Press. His short stories have been published with Shotgun Honey, Bristol Noir, Mystery Tribune, Yellow Mama, Punk Noir Magazine, Ghost Parachute, and others. Connect with him on Twitter @curtis9980.