He hanged himself with the blue croc skin belt, the one I bought for his birthday. The detective promised it’d be returned to me once the investigation was over, which he assured me as with most suicides, would be soon. Three or four weeks at the most.

Three or four weeks would be just long enough to miss the refund window at the gaudy Midtown men’s shop Albert and his friends single-handedly kept in business, so it was hard to give a shit about it after that. The belt could sit and rot in a plastic evidence bag for all I cared, with Albert’s last breaths forever trapped in its ridges and grooves.

Albert always claimed gifts from his woman made him uncomfortable, but I think he secretly enjoyed being spoiled. It wasn’t about that for me, though. The ugly belts, tacky silk ties and gold rope chain bracelets I forked over on occasion were my insurance. They were quick reminders that I didn’t need Albert and never would. In turn, Albert never needed to prove his worth and manliness more.

Red-bottom shoes. Hermès bags. Trips to Rome and Paris where I collected more Michelin stars than there were real ones in the sky. I don’t know if those things were meant to intimidate me or make fall in love with Albert but I’d really never seen a difference between the two. To be in love was to lose all control. He knew that as well as I did.

I first learned it the day I became aware of how calloused my mother’s hands were. When she lost control she got a baby, three jobs and a handful of eviction notices to show for it. I promised myself I wouldn’t end up the same.

Whenever Albert thought he was step ahead of my affections (or fears) I’d leave something like a bottle of Tom Ford for him in the bathroom and the waltz would continue, bigger and better than before. I might’ve even been close to unlocking a condo, who knows. What Albert didn’t know was I that couldn’t actually keep up with the expensive gifts.

If it wasn’t from Chinatown it was returned, exchanged, or sold on Craigslist for cash. Albert had more treasures than he could keep track of and after a week or two with something new and shiny to distract him, he never noticed if something went missing. After a few weeks I didn’t even bother to keep my racket focused on things I bought. The onyx in his uncle’s pinky ring was a lovely little payday.

Sitting alone at the bar, I decided I did not pity Albert. Not even with his body lying cold in a box somewhere. If family heirlooms could be so casually forgotten, it was inevitable that I would be too. We both knew the rules of the game. Time was on his side, as it was for all rich men.

I don’t know why Albert killed himself. I wasn’t sure I’d ever allow myself to care. The only thing I mourned was a dance partner who taught me how to stay on my toes. A priceless gift.

My cellphone rang, vibrating deep and low inside my black leather YSL bag. The slow pulsation shook the entire tiny bar, a speakeasy hidden beneath a dry cleaner in Harlem. I could never remember the name of it, just that it was where Albert and I first met.

“You coming home for supper?” my mother asked.

“No. I’m meeting a friend. You get that check?”

I hung up and tossed the phone back into my purse. I took a moment to let my fingertips linger across the bag’s smooth, soft surface. I felt sorry for the lamb who had to die for it to be, but she was better off with me than as some old bastard’s pair of scuffed-up loafers.

The bartender asked if I’d like another drink. I shook my head, deciding that Peter should think he got me my first. 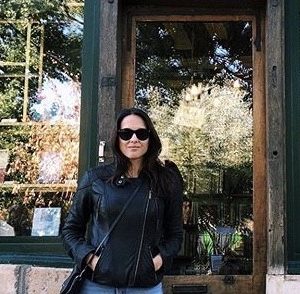 Alaina Sapienza was born in a small Rust Belt town famous for its hotdogs and fireworks. She currently lives and writes in Pittsburgh PA, where she loves telling stories about unlovable people, places and things.