New Man on the Hill

It was dusk on a Tuesday, and in the woods behind the stadium Terence raced down the path on his silver mountain bike. He was dressed all in black: black baseball cap, black North Face jacket, black jeans, and black sneakers two sizes too big for his feet. Charlo said they belonged to another boy in the gang, and were the closet fit he could find.

Terence had double-knotted the laces, but his insoles kept slapping against his heels when he raised the bike pedals. He was fourteen years old and had already gotten mugged for his stash. To repay the debt, Charlo from Druid Hill Gang told Terence to shoot one of the guys in Paper Crew, a new gang that had started dealing coke on the east side of the stadium.

He saw few cars and fewer people on Greevy Road. Terence spotted his target two blocks down the street and hid his bike behind an oak grove. When the Paper Crew guy passed him on the sidewalk, Terence sprinted from cover and pointed the sawn-off shotgun at his back.

“Bitch,” he said, and pulled the trigger.

When he returned to the convenience store, Terence did not find Charlo but Charlo’s boss, Washington.

“Charlo made a mistake,” Washington said, and Terence took a seat in one of the white plastic chairs. “He set up a job without permission . . . You bring a change of clothes?”

“Blood on those sneakers—anyway, they’re too big. Your mother living in that half-way house?”

“Out last week,” Terence said. “They gave her one of those apartments on Chestnut.”

Washington said, “You did good calling HHS. I mean, for her beating you. She knows you’re serious, not to be pushed around like a boy, and in the meantime you and I have gotten closer.” He placed his hand on Terence’s shoulder and gently squeezed it.  “I knew your father. Jesus, he died in a prison riot . . . He was good but reckless. If you can be good and careful, there’s no limit for you on the Hill. You ever been out county? A phone and a place to sleep for a few weeks. You’ll pay off the debt, so let’s forget about Charlo, huh?”

In the apartment on Chestnut Street, his mother sat hunched over a gray formica table in the kitchen.

“How was jail?” Terence said.

Terence saw there was a sofa in the living room and he walked over and stretched out on it.

“I did, but not like what you said. You shouldn’t talk to those people.”

His mother laughed and said, “The blood on that jacket is yours? You’re too much of your father, Terry. Soon you’ll be gone. You’ll be gone earlier than that

“They said Dad was reckless.”

“Sure they did. And what did someone tell me at the half-way house? The kid who robbed you was Charlo’s nephew.”

Terence got up and slapped his mother. Her head shook and she staggered back to the table.

He walked upstairs to what was supposed to be his bedroom.

He would ask Washington about Charlo’s nephew.

At one in the morning he got a call.

“You’re going out county. You want clothes or what?”

Terence looked down at the broken gutters on Chestnut Street: “I’m a twenty-seven.”

He left the house in a three o’ clock van. 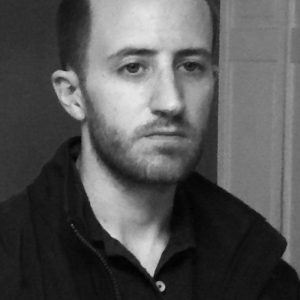 Max Thrax lives in Boston with his wife and two children. His fiction and poetry have appeared in Girls with Insurance and Nickelsteak. Currently he is querying his debut novel, a hardboiled gothic thriller set in rural New Hampshire.