Vaughn Stills waited at the stoplight, sleet falling on his car. He could feel his life oozing away with every ping.

He went to the Kroger and found the blue box.

Leslie reminded him to go by the dry cleaners because she needed her pantsuit for the open house tomorrow. He checked his watch. It closed in five minutes.

He was two blocks away before he realized the blue box of mac n’ cheese was sitting on his passenger seat. He had just walked out with it, unpaid for.

Smiling, he felt a little dizzy.

A honk from behind jolted him out of his reverie.

My new enthusiasm. That’s what he called it — the solution to the sourness of soul that had descended on him after his 43rd birthday. A meaningless age, a meaningless life.

For a few weeks, his “new enthusiasm” only covered small items. A printer cartridge. A pack of Trident. A box of screw anchors. Pointless thefts that left him with a buzzing in his veins that he hadn’t felt since, well, ever. Leslie even commented on how happy he seemed lately, how he was smiling more, laughing more.

He began relishing work. Life no longer felt like a long, slow conveyer belt to the grave.

But then the small hits began to fail. The challenge of something bigger began occupying his thoughts. More than once, Vaughn’s boss caught him staring dully into the grey, wintery void outside his office window as he dreamt about what to take next.

Vaughn pulled his knees to his chest, squeezing his body into the shadow cast by the light of the Pepsi machine. Down the hall, the security guard’s footsteps clicked closer. Under Vaughn’s right arm was an Xbox. Again, nothing he wanted or needed, but when he saw it at the Wal-Mart, he knew. Take me, it whispered.

He began planning, studying the store hours, when the guards came and went, when employees arrived, where the loading dock entry points were. In a week he felt confident. He rose at 3 a.m., slipping out of bed without waking Leslie, and drove to the Wal-Mart, parking on the unlighted side of the building, near the dumpsters. Freight arrived at 3:45. but it wasn’t taken into the store rooms until 4. In that time, Vaughn figured he could slip in, grab an Xbox, and be back to his car in three minutes. A cinch.

Instead of walking past, the guard stopped in front of the machine, choosing a soda. Vaughn could count the black hairs on his hirsute hand. The machine consumed the guard’s dollar. If he moved even an inch to the left, there would be no way for him not to spot Vaughn. With an industrial rattle, it spat out the drink. The guard snapped it open, took a sip, and clicked away.

Vaughn waited for total silence before slinking off.

Back in the car, Vaughn knew it was one of the greatest moments of his life. His heart swelled as he gazed at the Xbox.

Standing in the pinkish pre-dawn light outside the gas station, filling his tank, he went over the events of the past half hour, congratulating himself on his courage and already pointing his thoughts to the next job and all the days he couldn’t wait for. Then, from behind a skeletal hedge, a figure hustled towards him, pulling a small revolver from his hoodie.

“Keep quiet and gimme your wallet,” the figure said, face shrouded, before glancing into the car. “And that Xbox, too.”

He handed over his prize with the anguish of a mother leaving her child on an orphanage’s doorstep, and the figure, now carrying the Xbox, disappeared as quickly as he’d arrived.

Driving away, though, he started smiling.

Of course. Why hadn’t he thought of it before?

And soon, in the stale heat of the pawn shop, his eyes were seeping across the glass cases full of handguns, and he started to feel that beautiful, familiar buzzing in his blood. 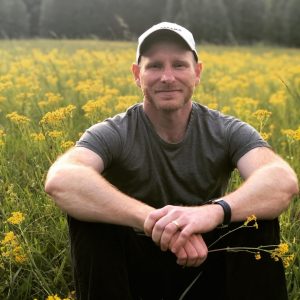 James Hadley Griffin is a teacher and writer living in Alabama with his wife and two hounds. His fiction has appeared in Ellery Queen's Mystery Magazine, Tough, Pulp Modern Flash, and Popcorn Fiction. Find him on Twitter: @JHadleyGriffin