Mush-Mouth James is sitting on his stoop drinking a tall boy of Busch Light out of a brown paper bag. It’s humid as hell outside, even worse in his efficiency apartment. Since his window unit gave out in June, being inside is like being stuck in a sweat box. It’s better out on the stoop with a cold beer.

He’s flipping through his little red notebook, taking stock of how much money he owes and who he owes it too. A little over half of his welfare check is going to go to paying back all of the neighbors that kept him afloat this past month.

The first of the month means payback time and James always pays his debts.

He didn’t use to. He used to lie and scam and rob with the best of them. Then he lied to, scammed, and robbed the wrong guy. Got his front teeth knocked out and a new nickname in the process. He learned his lesson.

He finishes the rest of his beer. Feels inside his pocket to make sure his .38 revolver is still there. It’s a long walk to the check cashing place and the stick-up boys have been out in force this summer. He’s not about to get robbed of this month’s money.

He sees his neighbor, Brian, walking by the bodega.

“Yo Brian, you ain’t got five on you, do you? Just need five more to buy a pack of smokes and five more means I owe you an even twenty. I’ll pay you back in a minute.”

The way his tongue smacks against his gums causes every word to splash together. He sounds like what wet ink looks like when it bleeds together. James knows he’s hard to understand. He watches as Brian deciphers his words.

He pulls out a five and hands it to James. James puts it in his pocket and walks into the bodega. He comes out smacking a pack of cigarettes against his palm.

The walk to the check cashing place is a sweaty one. He says hi to everyone he passes. They smile and nod. His neighbors are his family. He puffs at his cigarette, walking up the hill.

Liberty Check Cashing Services is packed. A line of people out the door. James queues up, smokes, and waits.

“Next please,” the cashier finally says.

James steps up and smiles a toothless smile. “How you doing, beautiful?”

She coldly says, “fine,” and counts out his money.

He shoves it in his pocket and starts the trek home, gripping the handle of the gun his pocket.

Two blocks up from the check cashing place he hears the clomping of footsteps behind him. Here we go, he thinks.

“Motherfucker, pay me,” the boy behind him says.

James turns around, squeezing the handle of the gun a little tighter. There’s two of them, both in white t-shirts with bandanas tied around their faces. Looking like old west bandits. The one pointing the gun’s hand is shaking. The other doesn’t look like he’s a day over thirteen. They look more scared than tough.

“Nah man, this is my money. I got debts to pay. You kids best run off now or else you liable to get hurt.”

The mushed-up jumble of words sparks confusion in the stick-up boys’ eyes.

James sighs. He pulls the revolver out of his pocket and shoots the one with the gun in the foot. His white sneakers explode red and he drops to the ground. He spins and points the gun at the other kid, the young one. The kid pisses his pants and with a cracking voice says, “Please, don’t kill me.”

“Run off,” James says. The kid does just that.

James puts his gun back in his pocket and leaves the stick-up boy scream-crying on the sidewalk.

Back on Main Street, James sits on his stoop, drinking another cold beer. Brian walks by and when he does James stands and slaps a twenty in his palm. He smiles at Brian.

“First of the month, baby.” 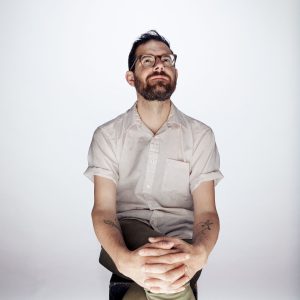 Karl Spaeth is a writer, comedian and graphic designer living and working in Cincinnati, OH.