Broke into Jean Barlow’s bedroom when you were fourteen and she and her husband were on summer vacation. You looked at and touched all her frilly, silky underthings. Inhaled her scent when you brought them to your nose.

She still looks good at forty.

Still got that Poindexter-looking shit of a husband, even though you swear to Christ that she looks at you the way that you’ve always looked at her. Her eyes say, “Do it.” Her body says, “Take it.”

She’s all you can think about anymore.

One night, you climb in through her window, just like that summer when you were fourteen, and you wait.

Finally, you hear a car door shut, followed by another. You hear the front door of the house open up.

Downstairs, you can hear them.

They’re arguing. Poindexter has a nasally voice. Just as you’d imagined. Jean, however, has there ever been a woman blessed with a more angelic tone? Even when she’s agitated, like now, she sounds so melodic.

The argument gets progressively heated. Their voices grow closer, louder. Something smacks the wall just outside the bedroom. Is he hitting her? You hear Jean cry out and you’re sure of it now.

It’s time to move, you tell yourself.

The door is flung open just as you move towards it. Catches you in the face, busts your nose. Warm blood pours outward, spilling into your eyes, downward into your mouth. You drop the gun that you were going to use and he’s there, in the doorway.

Jean is backing into the room. The door slams shut. They haven’t switched the light on yet and don’t see you. Poindexter’s standing over Jean, who’s on the bed, and he’s raising his belt. Down and again and again. Each time the leather connects with her skin, she begs him to stop.

You tackle him before he can stripe Jean’s perfect skin with any more welts. Take him to the carpet by surprise. You hear his head connect with the nightstand, toppling it, on your way down.

You feel his face, his cheek getting softer as you realize that you’re not using your fists any longer but instead a blunt instrument. The metal lamp that once sat on the overturned nightstand.

Jean’s yours now. You know she will understand that you did this so that she could be free of this bastard. So that you could be together.

Gunfire and the slug splits your chest. Your body crashes to the floor, feels like a mountain falling. 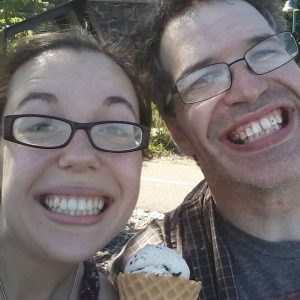