When the story comes up, and it often does because Christ, what a sick and sorry mess, that’s all the justification you can offer.

Your older brother Axel, at 37, had moved back home. Taken his old bedroom, plus the adjoining room that used to be your father’s office. A top floor suite in the lazy suburb of Crescent Beach, with your mom to cook his meals and drive him around once he got his second DUI.

Yeah, he was that bad. Not only lazy and often out of work, but prideful and bad with money. Why any dealership leased him a forty thousand dollar truck, you can’t fathom.

Of course he fell behind on the payments.

Of course your mom took up the slack.

She was always soft, generous. As kids you knew how to take advantage of that. But your father was around to play bad cop. Set boundaries. Once he died, Axel was pretty much governed by his whims. And your mom let herself be governed by Axel.

In his second DUI he’d swiped a parked car, dragged the back end of his truck down North Bluff Road before being stopped and refusing the Breathalyzer. Promised his lawyer he’d go to rehab. Welched.

“He doesn’t have a problem,” your mother said.

That stupid, unpaid-for truck sat in her driveway all year. And she made the payments using her retirement money.

The house fell into disrepair. And filth, too, that foul Axel smell of unwashed clothes and dirty fish tanks, of vape juice and the crusty loads he tugged out in his room.

“He’s had a hard time of things,” your mom liked to say. “He’s still finding himself. Axel was a preemie, you know.”

When you asked him when he was moving out, Axel stopped talking to you.

“He feels you pick on him,” your mom said.

The money and the dirt were bad. The guns were the sticking point. He’d inherited a few from your father and grandpa, rifles and shotguns and pistols. When you forced your mom to let you see the damage he’d done to the house, you spotted them everywhere. Ammunition, too. Shells on his dresser, on his bed.

So you called the police and they came and took his guns. He was working a camp job at the time, a pipeline up north, but your mom was there to wail at the injustice. To tell the officers her boy was getting better, he was really starting to find his way.

Was it a week after that you dropped by?

It was ugly and he’d used a knife on her before turning it on himself. She was naked and he was only wearing boots, along with one of her incontinence pads.

You took a lot of teasing for that, which couldn’t have been easy. Stay at Home Son Kills Mother, Self While Wearing Adult Diaper. Just the kind of local news that gets shared among colleagues for a lunchtime hoot.

The funeral would have been hard, I imagine, and the wreck of their combined finances pretty much washed you out. Thankfully you found a buyer for the house in the market for a tear-down.

Nowadays you’re in here when we open at 11. And you order double Crown and Cokes with your inheritance. Sometimes the regulars talk to you. They often talk about you. Think your life’s bad? Charlie over there, let me tell you about him. Remember that story from a couple years ago?

I serve you drinks and make sure you leave at closing. I hear you muttering to yourself, you know. The Good Son, alone at a corner booth, justifying himself to his whiskey. 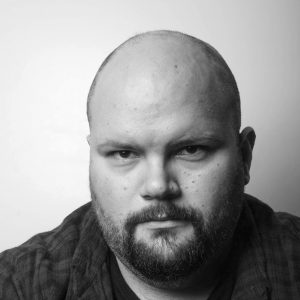 Sam Wiebe is the award-winning author of the Wakeland novels, one of the most authentic and acclaimed detective series in Canada, including Invisible Dead, Cut You Down, and Hell and Gone. Wiebe’s other books include Never Going Back, Last of the Independents, and the Vancouver Noir anthology, which he edited. Wiebe’s work has won the Crime Writers of Canada award and the Kobo Emerging Writers prize, and been shortlisted for the Edgar, Hammett, Shamus, and City of Vancouver book prizes.