“It’s not a who. Millicent is a cryptocurrency. You know, like Bitcoin.”

Dr. Abrams tented his fingers and pressed them to his lips. “Fake money.”

“That’s what I thought. Years ago, I did a favor for a friend. No need to go into any detail on that. As a thank you, this friend gave me six thousand Millicents. I thought it was a gag. But you know what they’re worth today? More than fifty million dollars.”

Dr. Abrams whistled. “But you’ve…lost them?”

“I didn’t lose them. They’re in a digital wallet that’s password protected. Only problem is, back when my friend gave it to me, I didn’t take it very seriously. So I can’t remember the password. I only get ten tries to open this wallet before it seals shut forever, and I’ve already used eight of them.”

“How does it work? You swing a gold watch in front of my eyes?”

“Only in the movies. I use a technique called visualization. If you’re ready, we can try it now.”

The client scowled. “Not so fast. Explain it to me.”

“I understand. You’re worried I’ll make you cluck like a chicken in the middle of an important business meeting.”

“That’s not what I’m worried about.”

“Right. There’s a lot of money at stake, and you don’t trust me. You think I could lift the password from your subconscious and use it to steal your millions. But of course, I don’t have access to this digital wallet, so there’s really no danger of that.”

The client smiled with no warmth. He looked familiar to Dr. Abrams, like a character actor best known for bit parts in Martin Scorsese movies. “So how does it work? This visualization?”

“Picture a room that’s very familiar to you. A room full of memories, both good and bad. Think of all the little details that make up this room. Pictures on the wall. Imperfections, like an uneven table or a flickering light. As many details as you can remember, then think of five more.”

Dr. Abrams saw that his client had closed his eyes. His body was relaxed.

“One by one,” Dr. Abrams continued, “I want you to remove the bad memories from this room. Keep going until only the good memories remain. When all of the bad memories are gone, look down at your feet. You’ll see a discarded matchbook. Pick it up and open it. The password is written inside.”

“I gotta thank you, my friend,” said Vicenti. “The fucking hypnotist, it worked. I’ve got the password and now I’ll never forget it.”

“See, I told you it was no bullshit. I never woulda been able to quit smoking without Doc Abrams. So when do we discuss my finder’s fee?”

Vicenti laughed. “Come down to Emilio’s and I’ll buy you dinner. This is the room I pictured for my visualization. Only good memories in here for me now.”

“Well, you’re about to have a bad one. See, I’m at your house right now. Your wife was kind enough to show me into your office and sign me into your laptop. Don’t worry, she’s fine. She’ll be coming with me when I leave, and you’ll never see either of us again.”

Vicenti laughed even harder. “You’re a funny guy, Joey. Seriously, come down, we’ll have some clams.”

“I got your digital wallet open right here. I tried to guess the password, just for shits and giggles. Got it wrong, so now you’re down to only one attempt before it closes shut forever. Should I guess again?”

“Give me the password, Frankie. I won’t take it all. I’ll leave you, what, a million? That’s fair, right?”

“Okay, I’ll leave you half a million. You got ten seconds, Frankie.”

Joey Onions ended up leaving Francis Vicenti one Millicent. It was worth $166.67, not quite enough to cover his session with Dr. Abrams, whose body was found in the East River a week later. 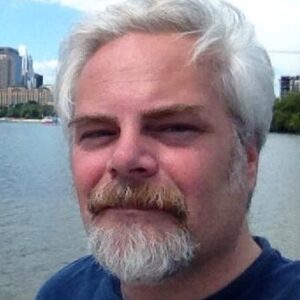 Scott Von Doviak's debut novel Charlesgate Confidential was published in September 2018 by Hard Case Crime. It was named one of the top ten crime novels of the year by the Wall Street Journal. Von Doviak is also the author of three books on film and pop culture, including Hick Flicks: The Rise and Fall of Redneck Cinema. He reviews television for The Onion’s AV Club, and is a former film critic for the Fort Worth Star-Telegram. He lives in Austin, Texas. Follow him on Twitter: @vondoviak.