I was coming back from a midnight piss and the three of them lay sprawled out in the dim light of the campfire, snoring like a pen full of hogs.  I thought to myself what a godforsaken mess is this?  It was humiliating, truthfully.  We weren’t hardly men, properly called.

Me and these three men with whom I rode made our livelihood holding up decent folks, and more often than not we celebrated our evil actions with more wickedness, drinking and whoring, just as church-going citizens might expect of such low characters.  We truly were unrepentant sinners.

It was enough to make a man hang his head in shame, but I fetched me an unopened bottle of hooch instead and sat back down beside the dying orange embers of our fire.

Drawing the cork, I took a stiff pull and found my thoughts turning to other times and places. I’d ridden for a time with a Bible-quoting outlaw, and I heartily hated that sumbitch. Big Jim Doolittle was his name.  I reckon he’s probably been hanged by now, or gunned down somewheres.

I thought of other outlaws I had known, both here in Colorado and back closer to the Big Muddy.

Yes, I was in a mood, and the sour mash just made it worse.

I regarded my three companions as they slept.

Del’s got a gut on him like a pregnant sow.  Hangs down so far over his belt, he probably ain’t seen his own dick in ten years or more, just feels around down there for it when he’s got to take a piss.  But Del ain’t the worst of them.  Sleep or wake, Bridge ain’t nothing but an animal no how, about like a cornered racoon on his nicest days.  And Sten’s a good enough kid but he don’t hardly speak English being as his folk are from Crimea or some such place.  That smirk Sten wears could drive you up a tree, but he’s got them twitchy fingers so’s you can never quite trust him. When we’d play cards, I swear I about wanted to pull out my buck knife and cut them fidgety digits clean off his damn hands.

But truth be told, none of this ruminating could properly be blamed on my travelling companions. Being honest with myself, I wondered what sort of man I had become, creeping back into a midnight campground after a day spent planning and performing a stagecoach robbery, a bold-faced crime in which several persons lost their lives, never to rise again.  The strong box on the coach had carried less cash than expected.  We took under two hundred dollars for our trouble.

It’s a hell of a life we live.

I drank more and tried not to think for a while.

I’m not sure what come over me then, whether it was angel or devil, but I knew that I had no choice but to leave my wicked ways behind me.  I also knew that these three confederates of mine would not take kindly to my departure.  Nor did I have enough to stake myself a proper life on my paltry share of our take from the coach.  I would need more, and I did not need these three coming after me with their evil schemes and malicious designs.

I took another long drink and it was settled in my mind and in my soul.  I would be free of this life.  I dared not draw my pistol nor use my long gun for fear of waking the others before my business was done, but I saw to each of my companions in turn with my buck knife.  I slit each other their throats in turn, muttering prayers for their everlasting souls even as I murdered them in their sleep.

After putting all the shares of cash into my saddlebags, I loaded their weapons and other gear onto Bridge’s horse, which I tied behind my own.  Del’s horse had become sway-backed from carrying that fat bastard from hell and gone, and Sten had abused his horse spitefully.  I gave both these beasts their hard-earned freedom.

Then, mounting up, I rode out in search of an honest life for myself farther west. 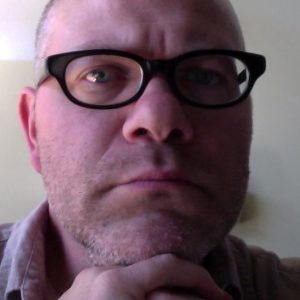 Chuck Caruso lives with a medicine woman and their two cattle dogs in Portland, Oregon, where he teaches literature and creative writing at local colleges.  His crime, horror, and western noir tales have appeared in numerous print and online publications, including Cemetery Dance, Shroud, Flash Fiction Offensive, The Big Adios, and The Western Online.  Most recently his work has been mentioned on NPR's All Things Considered and selected for inclusion in Otto Penzler’s "best of the web" anthology Kwik Krimes.  Follow him on Twitter: @jcdarkly  Or visit his website: chuckcaruso.com