Gillian grabbed hot plates with bare hands and carried them to the only couple in the dining room. She’d never been with a Mexican, but the young man smelled like money, and she was due a new meal ticket.

The little brass bell on the door rang as two large men entered the little restaurant. Americans. Big city accents. A chill ran up her spine. They wore light jackets, despite the Chihuahua City heat outside. She watched them sit in the corner booth.

“Some fucking service over here?”

She put a hand on her hip and turned, face blank as a bullet. The one facing her leered scanned her from sandals to freckled tits, but never looked at her face. A gold tooth flashed. One of Vinnie’s “associates.” She’d seen him from the windows of the house in Staten Island where Vinnie had kept her.

“Gillian,” said the one with his back to her. “Just when we we’re gonna quit looking, we hear about a pretty white girl hustling tables in this shithole town.” He threw up his hands and turned in his seat. For a bad moment, she thought the face was Vinnie’s.

“Myra, Gillian, whatever. We got you.”

Gold-tooth grinned. The Vinnie look-alike approached. “That’s some mouth on you.” He grabbed Gillian’s face in a right hand like a butcher’s block and squeezed until her full red lips protruded like strawberries. She didn’t bother to struggle. Gold-Tooth chuckled.

“I’m Joey. Vinnie’s cousin. From Philly. He never mentioned me?”

He released her, patted her cheek.

The hand shot up again, and Gillian’s head snapped back. Blood from her split lower lip spattered on the Mexican tough’s white shirt behind her.

The Mexican was out of his seat in a flash, his face twisted in outrage. The girlfriend tried to grab his wrist.
“Mi vida, no!” she said.

“You like hitting women, cabrón?” The Mexican advanced on Joey, big in the shoulders but still a head shorter than the gangster.

The cook rushed though the flapping doors into the dining room. “¿Qué pasa aquí?”

Gold-Tooth reached into his windbreaker and brought out a flat black Glock. The cook vanished.

Gold-Tooth fired two rounds into the kid’s chest, watched him fall. His feet drummed a tiny flamenco on the floorboards.

Gillian held her apron against the split lip and stood her ground. Nowhere to run anyway. A pistol appeared in Joey’s hand. Gold-Tooth, still seated, scanned out the window.

“I hear Vinnie got a little rough with you, but that ain’t cause to spray his fucking brains on the ceiling.” Joey looked at Gold-Tooth and motioned toward the sobbing girl. “Such a mess somebody had to clean up.”

“How ‘bout some beers?” Gillian dropped the apron and let the blood run down her chin. Joey paused to watch it run down her neck into the space between her tits. “Cooler heads and all.”

Gold-Tooth had the Mexican girl by the arm. He raised his eyebrows and jerked his head toward the door.
“Relax. The chief of policía is still counting his money.” Joey pointed his weapon at the ceiling and stepped toward Gillian. She parted her broken mouth and gave Joey the look that, once upon a time, made Vinnie so manageable.

He weighed a breast in his left hand, and probed inside her bra with the muzzle of his gun. Gillian released a calculated, barely-audible sigh.

Gold-Tooth had the Mexican girl laid on the table between two plates of chile rellenos. He’d stuck the gun in his waistband and had both hands full of young Azteca flesh. The girl’s breathing was rapid and shallow, and she stared unblinking at the ceiling.

“The day I drink Mexican beer, just put a fucking bullet in my head. Bring tequila. We’ll get acquainted first, talk business after.” He holstered his weapon. “You must have a good reason for whacking a Family boss. You play nice, I let you tell me.”

Gillian went to the bar, bent and reached underneath, closed her fingers over the sawed-off 12-gauge hanging above the shot glasses.

“Y’all want a single or a double shot?” 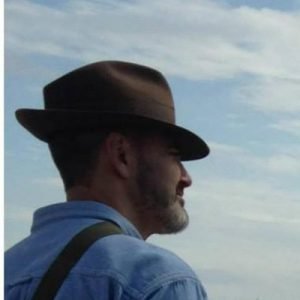 Steven Howell is a U.S. Army officer working on his first novel. He plans to retire from military service in 2013 to write full-time. He lives in Vicenza, Italy. Find him on Twitter @steventhowell.