Life in a Northern Town

Life in a northern town, she thinks in the diner, wearing a black turtleneck, desert boots, her cigarette, burning. The coffee smell is intoxicating. The notebook and pen have an everlasting battery – it won’t lose its charge, ever.

But some things do lose their charge.

She taps the notebook. She’s been called a wise soul. Too smart for her own good.

She’s not quite twenty. She’s already seen New York and Los Angeles. She’s seen Minneapolis. In Minneapolis, the northern town, the snow is part of you. It goes into your DNA. It harkens back to earliest memories of sledding and snow forts and later memories of the smell of weed, seeing your breath exhaled on a winter night, rubbing mittens together, tire changes on the side of the road. The first snowfall is a pretty thing, delicate, the last snowfall is a tiresome loser that’s overstayed its welcome and left nothing but dirty, slushy, exhaust behind. A loser who’s done something bad.

She waits, keeping her eye on the St. Paul diner’s door. The booth is old, the leather seat is cracked, the table is worn. She holds a butter knife by the handle carving marks into the wood. The table is covered with worn scratches.

The waitress dribbles coffee into her cup, mostly splashing accurately. She drops in cream. Sips. It tastes like tar laced with milk. She keeps drinking coffee even though it’s four o’clock in the afternoon.

When she got up this morning, it was cold. The quilt didn’t stop her body from going rigid, every part of her protruding in the frozen air. The cold shower hadn’t helped, her barefeet on the hardwood floor, the heater in her old Mustang that didn’t kick on, and now the drafty diner – cold. She isn’t warm. She stopped her car at the railroad tracks and looked both ways, as her Irish father always told her to do. “Kay Riley lost her arm out on the railroad track,” her father said, “Jim O’Malley went out for butter and never came back.” The train rattled past her like an angry God, howling, shuddering along the northern town. Snow lines the gutters like forgotten dreams and she hopes for a fresh dusting before nightfall.

Through the windows, dusk settles like a whisper, dimming the lights, sending gunflint grays and soft pinks out across the horizon, beckoning her to hurry home before dark, to be safe inside. When the sky is all blue black and the diner inside lights are now bright and the grease smells switch from eggs and coffee to burgers and fries – he appears at the door.

He’s too skinny and has dumb, desperate eyes. He darts them around the room like she is a cop and he can escape the trap. Only, she’s no cop.

He slides in across from her all phony smiles and chit chat. His hand tapping and knee bouncing. “So, your Pat’s daughter? I knew your father when…”

She doesn’t smile, doesn’t take her eyes off him. He already broke the rule. He isn’t supposed to speak about her father.

He spits a laugh. “Your family is so Irish. Did your father tell you I’m an actor? I’m going to LA. So much smog there I didn’t even know there were mountains until one day after it rained and I saw them. LA is full of surprises.”

She keeps her stare level. “So is Minnesota.”

“As soon as I can, I’m going back. I used to live not far from the Strip.”

She speaks then. “Sunset and La Cienega?”

His eyes look left and right. “I haven’t lived at that address for years.”

She smiles then. “You ever hear of Irish Alzheimer’s? You forget everything except the grudges.”

“Grudges?” he asks, no longer smiling.

She writes one word in the notebook and pushes it across the table. “A poem,” she says.

He reads the name, going pale, his eyes darting around. “Wait –” he whispers, “Wai –”

He bolts for the door but he doesn’t get far. Her father’s men are outside, waiting.

She knows that he won’t even make it across the railroad tracks. 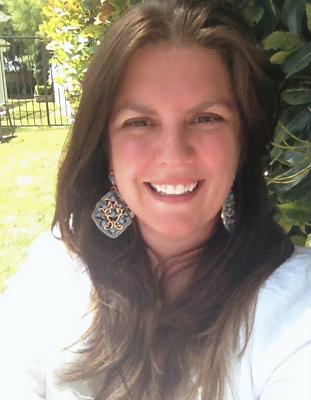 Abra Deering's fiction, poetry, and essays have been published in various literary journals, including the East Coast Literary Review, Los Angeles Times, Huffington Post and TheWrap. She is an Adjunct Professor of creative writing. Her historical mystery, “Bohemian Soul” about Sherlock’s daughter, was selected for the Jersey Devil Press’s Sherlock Holmes special edition. She has an MFA from UCLA in screenwriting and a BA in English Literature from the University of Minnesota. She's written and directed an award winning Amazon Studios test film. She loves mysteries, ever since her mom gave her her first set of Nancy Drew tweeds! You can find her online at www.adeering.com or twitter: @adeer_writer and insta: @adeerwrites