Hamilton woke with a canvas bag over his head and a bad case of cottonmouth, the kind brought on by strong sedatives. He smelled diesel fumes and lay on a cold metal floor that bounced and rolled.

None of this meant anything good for a gambling addict who owed tens of thousands of dollars to dangerous people. Dangerous people he hadn’t paid.

The van stopped, the back door screeched open, and someone yanked Hamilton out by his feet. He slammed onto dirt—not asphalt or concrete—his breath whooshing painfully from his lungs.

“Take off the bag,” a deep voice said with a slight Indian accent.

That would be Raj Khatri. Rumor had it Raj had been part of the dreaded Mumbai underworld before he came to Omaha. He ran several criminal enterprises in the city, but loan sharking was his primary gig. Hamilton had been dumb and desperate enough to borrow from him.

Someone pulled the bag from Hamilton’s head, and he found himself in the middle of a cornfield. Not exactly a rare sight in Nebraska, but you didn’t drug a man and then drag him into the stalks for a chat.

“Mr. Hamilton,” Raj said, standing a few feet away flanked by two of his heavies, both armed with submachine guns. “My apologies for this . . . abrupt meeting.”

Raj held up a thick-fingered hand. “Mr. Hamilton, we are past such things.”

“So I guess you’re going to kill me now,” Hamilton said, almost whispering.

“So pessimistic,” Raj laughed. “I am actually going to give you a chance to live and be acquitted of everything you owe me.”

“I don’t understand,” Hamilton said. Raj’s pronouncement didn’t give him any hope. It terrified him. This was not a man known for his mercy and sense of fair play.

“I have a game for the gambling man,” Raj said and pointed to his left, then to his right. There was a narrow passage through the cornfield in either direction. “Left or right. You choose, and I will give you a five-minute head start. One path leads to a road, the other deeper into the corn. If you make it to the road, you win, and go free.”

Raj pulled a heavy automatic pistol from beneath his jacket. “You lose. Now which way will you go?”

Hamilton drew in a shaking breath. “Can I, uh, smoke before I choose?”

Raj laughed again. “Of course. This is a friendly game.”

Hamilton pulled his cigarettes and lighter from his pocket. He lit up a Marlboro, took a drag, and blew it out. He watched the smoke curl and dance in the air and examined his options. Both paths through the corn were identical. No clues which might lead to the road. He took another drag then dropped the cigarette and snuffed it beneath his heel.

Hamilton checked his watch as he jogged down his chosen path: 4:44 p.m.  The corn seemed endless, blurring past in a kaleidoscope of yellow and green. More yellow, though. The stalks were brittle and dry.

Hamilton stopped when his watch read 4:49 p.m. He put his finger in his mouth, wetting it, then held it up. The wind blew to the south, just as it had blown his cigarette smoke. Back the direction he’d come, back toward Raj Khatri.

Raj was right. Hamilton was a gambling man, but more importantly, he was also a cheat.

Hamilton flicked his lighter and held the tiny spear of flame to the nearest corn stalk. It caught immediately, along with the one next to it, and the next, until a bright plume of fire and smoke rose into the sky.

Hamilton ran, the wind in his face, fire at his back. 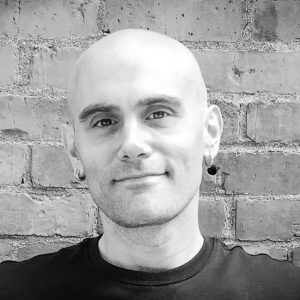 Aeryn Rudel is a writer from Tacoma, Washington. He is the author of the Acts of War novels published by Privateer Press, and his short fiction has appeared in The Arcanist, Factor Four Magazine, and Pseudopod, among others. He recently released the flash fiction collection Night Walk & Other Dark Paths with The Molotov Cocktail. Learn more about Aeryn’s work at www.rejectomancy.com or on Twitter @Aeryn-Rudel.