“People say you sing well. Why not sing for us now, Ashikawa-san?”

Hiraizumi spoke loudly. The bar’s soundproofing didn’t block out the shrieks and gibbers of the typhoon that’d wheeled up from Guam, made landfall at Wakayama and was passing over Tokyo.

“What about the American song, My Way?” suggested Umeki, one of several other men at the table. “That would be appropriate.”

Ashikawa knew Umeki’s presence tonight was a bad sign. As well as a killer Umeki was a torturer, skilled at breaking bones, dislocating limbs, rupturing organs while keeping his victim conscious. This meant the suffering continued for as long as possible. Consequently, rumours of that suffering would spread among people who might have reason to offend Hiraizumi and persuade them not to offend him.

The Mama-san replenished Hiraizumi’s glass from a chunky bottle of 21-year-old Hibiki. “Will I bring Ashikawa-san a microphone?” she asked.

“No, thank you,” said Ashikawa. “I’ll go to the machine.” He looked at the company. “If nobody minds?”

“Go ahead.” Hiraizumi replied. The karaoke machine was in a corner by the window and at the other end from the door. Flight was impossible. Before he reached the door, Umeki and his goons would be all over him.

A barmaid located the song and Ashikawa lifted one of the microphones off a cabinet that contained the mixer and sprouted cables from its back. Nearby, the typhoon sent rainwater gushing down the outside of the window. The lights of Shinjuku beyond it were a phantasmagorical blur. Somehow, the glass, rainwater and neon combined to give the window the properties of a mirror and Ashikawa’s reflection in it was crystal-clear. Small, puny, very much the humble accountant.

The accountant who’d dared to think big.  Dared, but lost.

The first English words flowed along the screen and he started singing about the end being near. No wonder Umeki thought this song was appropriate. But soon he forgot about his predicament. He imagined himself on a stage performing for an audience of thousands, not in a hostess bar performing for half-a-dozen gangsters.

Those gangsters applauded when he finished. Ashikawa watched Umeki’s hands pummel each other, aware that soon they’d be pummelling him. Even the Mama-san exclaimed, “Sugoi!” and risked cracking her make-up with a smile.

And Hiraizumi looked delighted. Ashikawa hadn’t known the boss was a karaoke fan.

Something made him pick a second microphone off the cabinet and ask Hiraizumi, “Would you like to sing with me?”

“Sure, we can do another Sinatra.”

Hiraizumi joined Ashikawa behind the machine. Absent-mindedly, he brought along his glass, which prompted Ashikawa to say through the microphone, “Mama-san, bring the boss his bottle. To sing Sinatra properly, he needs a full whiskey-glass in his hand.” His amplified voice gave him an absurd sense of being in control.

The opening chords breezed from the speakers and they started singing about flying to the moon and playing among the stars.

Meanwhile, discretely, Ashikawa picked with one hand at the cables protruding from the cabinet’s back. This karaoke machine was an antique. The ends of the cables, where they were attached to the cabinet, had lost their coatings and bare wires were exposed. Ashikawa worked on exposing those wires a little more.

The final verse was greeted by sycophantic clapping and cheering from the goons at the table.  Please, the pair of them soared, be true –

Ashikawa dropped his microphone, grabbed the bottle of Hibiki from the counter and hurled it through the window. His other hand fastened onto Hiraizumi’s arm, holding him behind the machine and in the path of the typhoon that suddenly bellowed through the huge, jagged hole. He marvelled at the speed and volume of the rainwater that poured in, drenching him, Hiraizumi and the karaoke machine before Umeki and the others could scramble across. A savage electrical charge released itself from the cables and surged into them.

Ashikawa saw the final words roll across the screen: I love you. And mentally, before everything vanished in a crackling blaze of light, he bowed. 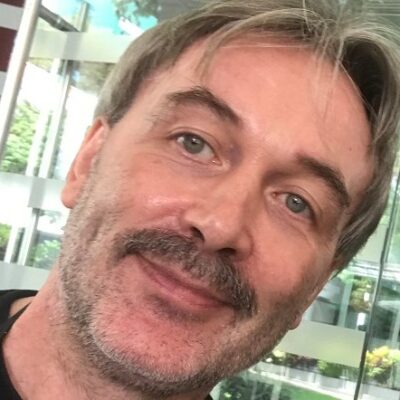 Jim Mountfield is the writer of around 60 published short stories and blogs regularly at www.bloodandporridge.co.uk/wp/.  He was born in Northern Ireland, grew up there and in Scotland, and has since lived and worked in half-a-dozen European, African and Asian countries. During the 1990s, he spent seven years in Japan, singing a lot of karaoke.