You never know what’ll go through your mind in a clusterfuck of violence and degradation, but as Jess assessed the flesh, blood and cartilage in her mouth, she thought it tasted of dirty pennies, uncooked bacon and salt. She spat the glob across the room and her mind snapped to more pressing matters. Primarily how to deal with the whiskey-and-nicotine-marinated rapist who’d just rolled off of her.

She looked for a way out of the dank shed while keeping one eye on her attacker. The mass of Confederate pride had one hand reflexively covering the gushing hole in the middle of his face…and was using the other one attempting a one-armed crawl across the room, probably looking for what was left of his nose. The pair of saggy-ass jeans bunched around his ankles didn’t make his task any easier.

Unfortunately, Jess had spit the remains of the nose in front of the door she desperately needed for escape. And now 275 pounds of sobbing, shrieking, biscuit-fed beef sat between her and a chance at freedom. He let out an otherworldly howl.

Her brain swirled, balancing intellect and instinct. She knew she’d be ten kinds of tortured if the big man got to his feet. But watching him lumber in drunkenness and shock, she knew she had speed on her side. As he attempted to get up, she summoned as much force as 118 pounds can bring and stomped down viciously onto the side of his left knee. While her skirt had given him too easy an access to her world, her cowboy boots made him pay.

From the snap and the wail he made, she knew she connected with something vital to functional movement. She allowed herself a smile. Her daddy’d always told her when she was playing football against much bigger boys, “Go low, darlin’. Don’t matter how big they are, they all got knees.”

The man struggled to rise and pull his pants up. Jess kicked again, her heel connecting with his knuckles at his fly. The blow knocked him off balance and into the wall. She was struck by the irony that she was fighting to keep a rapist’s pants down and his dick out because it might be the only hope she had to live.

She dashed for the door. But the now supernaturally gory-looking beast grabbed her by the pony tail and jerked her head hard into the door jam. The impact caused her to bite down so hard she was sure she’d taken off a chunk of her tongue.

Still holding the pony tail, he whipped her head the other way, smashing it into the wall. She dropped like hard rain. Her thoughts were only colors now. Red, then dull grey, then whitest white. She willed herself to remain conscious as his fingers wrapped hold of her throat. He lifted her off the ground and up against the wall.

Her feet kicked for traction as he choked the life out of her. Jess sent frenzied kicks in the area of the man’s groin, but his bloated gut hung out far enough to provide a natural lard barrier between her boots and his balls.

She looked into his eyes. Whatever tiny bit of human resided in his hillbilly head had been replaced by pure animal frenzy. There was no more lust. She could see ending her was the single thought in his lizard-like mind. His fingers tightened and her oxygen-deprived mind started to cloud. He leaned into her face and hissed.

“Gonna ass fuck your corpse into the afterlife, bitch.”

With her last conscious thought, she jabbed her thumbs into his eyes and pushed until she felt jelly.

He dropped her, fell to the floor and wailed. Defenseless and almost infantile.

She stomped and stomped at the bloody hole where his nose had resided…until her boot heel crushed into his eggshell skull and he wailed no more.

She fished in his pockets until she found car keys. As she hobbled towards the door, she became aware of the soreness between her legs and threw up.

As Jess limped out of the shed she was grateful to see a little light left in the day, but it was fading fast. She was desperate for some means of scraping the foul off herself, but fought the urge to find a garden hose and attempt some sort of cold water clean up. Hot water and time was what she needed to heal and neither was currently available.

Twenty yards off she spotted a faded yellow Bronco and a ramble of a house with a few dull lights shining in the windows. Jess crept quietly to the vehicle as a bullfrog chorus wafted over the liquored-up laughter of men. She said a quick prayer that the keys in her hand would lead to salvation.

Jess gently eased her damaged parts into the driver’s seat and noticed a 12 gauge in the gun rack. She felt some small sense of relief.

She knew how to handle herself with a shotgun. Her daddy had taken her hunting since she was old enough to hold his game bag. Her first gun was a single shot .410 then she graduated to a 20 gauge side by side. At 18 she got a 12 gauge for Christmas and her daddy cried like a baby when he gave it to her.

She loved that weapon, but most of all she loved the shine of pride in her daddy’s eyes. He was the first man to treat her like she was special and precious and strong. And once a girl has that, she has everything.

Jess fired up the Bronco.

From inside the house she heard, “Where you goin’ Donnie-Ray? Don’t get rid a that girl till we all had a piece.”

She adjusted the rear view mirror to her small height and caught her ruined reflection. Bloodied, broken and beat sideways to shit. But beyond the physical she saw something different in her eyes. Something missing that she aimed to get back. Any country boy will tell you, if you poke it long enough and hard enough, even a good dog’ll go bad.

She grabbed the shotgun off the rack and headed for the house. 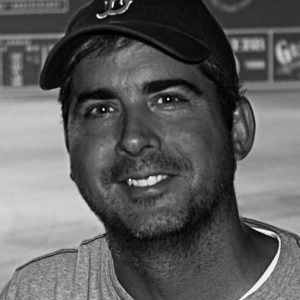 Terry Rietta is a father, a film maker and a lover of good stories. He left his former life as an ad agency creative director, to launch his directing career with the spot "First Look" for the Mill Valley Film Festival. The work was honored by the AICP and is on permanent collection in the Museum of Modern Art. His marriage of rich visual storytelling, cinematic style and character driven comedy are the cornerstones of an eclectic and original reel. When he's not shooting, he's writing and has been fortunate enough to have his stories published in Shotgun Honey, Jersey Devil Press and Parable Press.
His commercial work can be found at http://www.gartner.tv/director/terry-rietta