There is one thing I’m afraid of, though, and that’s that Johnny might get up.

“You hit me,” Johnny says.  He rubs his face and gingerly touches his nose.  “It’s broke.”

I looked at him.  I wasn’t afraid.

He was going to give me a beating.  But I wasn’t afraid, not when the beating was right here.  A man fears things most when they are far away and come creeping up slowly and he has to wait for it.  A man hates waiting.  His mind works against him and makes the beating get worse and worse, waiting for it.  ‘Get it over with,’ he says to himself.  ‘Beat me, kill me.  Just do it so I don’t have to sweat out waiting for it.’  That’s what a man wants.

“Know what?” Johnny asks, slowly touching his nose.  “I’m not going to do it now.  That would be too easy on you.  I’m going to give you that week we planned on giving you.   I’m going to wait so you can worry about it beforehand.  You can wait a long time and see it coming here – maybe in your crummy apartment with its lousy ceiling fan and lousy linoleum, maybe under the fire escape, maybe in the parking lot.”

Johnny picked up the clock’s lousy pendulum, walked up to me and scratched my face with it so blood ran down my chin.  My blood was redder and richer than his, running down my face into the linoleum.  I let him do it.  I was scared.

So I kicked him in the balls as hard as I could, just to make him angry.

I made him angry. 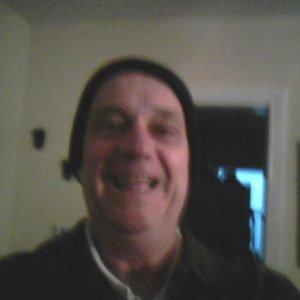 Paul Smith lives near Chicago with his wife Flavia.  He writes fiction & poetry, does poetry live at the Green Mill (Home of the poetry slam).  He likes public transportation, Milwaukee Avenue and Newcastle Brown Ale. If you see him, buy him one.