I stuff my hands inside the pockets of my pea coat and square my shoulders to make myself look bigger than I am as I cross the street in front of the Bank of New York building on 34th and 5th.

My grandfather helped build this bank.

He came over from Ireland, one of thousands of tempest-tost tossers looking for a better world and better opportunities on the other side of the proverbial golden door.  He came from a family that had survived famine, British subjugation, poverty and despair.  He traveled across the ocean in cramped quarters where sickness ran rampant among the passengers.  He was met in America with closed doors and “Irish Need Not Apply” signs on unwashed windows.

When he finally did find work, they put him on the 13th floor of the Knickerbocker Trust Company building, lugging bricks.  One day in 1935, he caught a bucket of mortar dropped from the 15th floor with his forehead, and the lights went out for good.  The bank never paid a dime of restitution for his injuries.

With no sight, no savings, and a sizable dent in his forehead, he couldn’t provide for a family.  To make ends meet, my grandma, a Polish-Jewish immigrant whose mother died in the Triangle Shirtwaist Fire when she was a little girl, opened a seamstress shop out of their one-room apartment in Hell’s Kitchen.

Halfway across the street, I roll the ski mask down over my face.

One day in 1947, my grandma was walking home from the butcher shop when she was grabbed by three men and dragged into an alley.  She fought them off as best she could.  My grandma was a fighter.  When she jammed a sewing needle into the arms and neck of one of the men, they got even more violent.

When she got back to their apartment later that night, her shirt torn, her eye swelled shut, her lip busted open, she was still clutching the sewing needle in her left hand.  Three days later, the police arrived at the apartment to question my grandmother for assaulting the men who attacked her.

The owner of a taco stand on the corner of the street sees me crossing, and slides the order window shut.

My mother came here from Guatemala in the 1970s, a refugee of that country’s civil war.  She met my Polish/Jewish-Irish father with the sky-blue eyes, and fell in love, despite her parents’ protests.

My father always wanted more, and developed a gambling habit which ended up getting him killed by a local wannabe mobster over a couple hundred dollars bet on the Buffalo Bills during the 1989 AFC Championship game.  My mother worked double shifts as a housekeeper in New York Presbyterian Hospital to support me and my sister.  She died last year of a heart attack.

I swing the door open, and pull the handgun out of my coat pocket, cracking the surprised security guard at the door on the side of the head.  I think of my grandpa, “Paddy” O’Halloran, and that at least I didn’t dent this poor bastard’s forehead.

An older woman tries to grab for the gun, and I push her down on her ass.  I think of Babcia Irena and silently thank this woman for fighting back.

I quickly walk across the lobby of the building to where my sister, the bank teller with the sky-blue eyes who dreamt this whole thing up, feigns fear.  She dutifully starts packing large denomination bills into a bank bag, and conveniently leaves the dye pack out.

We’ll meet up later, and figure out how to sanitize the cash so we can spend it.  For the moment, I allow myself a small sense of satisfaction.  For my grandpa.  For Babcia Irena.  For my mom who sacrificed so much for us.  For the assholes in the White House who think we should all go back to where we came from.  For the bigots who call us Mick, Kike or Spic.  For me, my sister, and all the shit our family has had to put up with through the years – finally, bank bag in hand, I’m holding our piece of the American Dream. 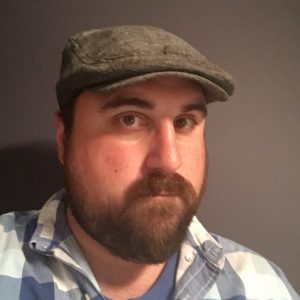 Jay Butkowski is a writer of fiction and an eater of tacos who lives in New Jersey. His short fiction has appeared in various online and print publications, including Shotgun Honey, Yellow Mama, Bristol Noir, All Due Respect and Vautrin. He has co-hosted a series of Noir at the Bar readings in Asbury Park, NJ, and is a founding member and Managing Editor of Rock and a Hard Place Magazine, a "Chronicle of Bad Decisions and Desperate People."