“But she knew his favorite color,” Mom said.

“She knows how much you miss Dad. It’s how all these charlatans get on. They pick up on the clues you give them.”

“This has always been your problem, Dwight. Too skeptical for your own good.”

Soon as I saw the bank’s caller ID, I knew Mom had bounced another check. I didn’t need to sign in to her online account to know where the money had gone.

Since Dad died, Mom was on a fixed income. Every month, I deposited a chunk to help out with groceries and incidentals, only to watch her give it away to that leech. What was I supposed to do? No one else was helping. Certainly not my piece-of-shit brother Larry, who was one missed piss test away from going back to the pen.

When Mom didn’t pick up, I had no choice but to ring the bastard. No answer. I didn’t know why I even bothered sometimes.

I decided to head down to see this psychic shrew, Dolores Mackinaw, myself. I’d dropped Mom off there before but had never been inside. Dumpy little house by the seashore advertising tarot readings in gaudy flamingo neon. The driveway was empty. A little bell dinged. The layout, a hippy nightmare. Thrift store candles, frills, lace, and patchouli oil.

Dolores emerged from the back room, cloying incense smoke wafting after her. She had the pinched, pointed features of a ferret and the palsied hands of a gypsy.

“Which one?” Dolores asked.

“Which son are you?” She gulped down the words.

I’d barely finished my name before Dolores began pitching a fit, tossing f-bombs like a sailor. She hurled a candle—a lit candle—at my head. Hot wax splattered a constellation on the wall behind me.

“What the hell is wrong with you, lady?” I reached out and snared her shawl. She tore away, stumbled, fell. Another inch left or right and she would’ve been fine. But as it was her temple struck square the corner of the table, head splitting open like a ripe cantaloupe.

Two lifeless milky eyes stared up at me.

I peered out the window, up and down desolate off-season streets. Then wiped my prints off the knob.

At the car, I went to call my brother, before realizing I’d left my cell at home. He lived at the end of the beach, so I drove there instead.

What had the old bird so spooked? She must’ve gotten our names mixed up. Mom surely would’ve mentioned Larry’s record. People freak out about ex-cons.

As I pulled in his complex, Larry was sloughing off the bus.

“Ain’t this a surprise?”

“Work?” I asked. A pointless question since my brother still wore his coveralls.

“Got about twenty minutes to get inside before this goes off,” he joked, pointing at his ankle bracelet. “You here about Mom?”

“Came down the factory an hour ago. Had me pulled off the floor. Said she’d been to her psychic. Was all worked up. Tried to call you.”

“I left my phone at home.” I looked through the dimming lot at the sun sinking low behind smokestacks. As weird as this day was, one thought lingered: in a crisis, why would she turn to my brother?

“Nothing to worry about,” Larry said, patting my shoulder. “I handled it.”

For once, my brother had stepped to the plate and saved me a headache.

“I have to get upstairs.” He glanced uneasily. “Wanna come up?”

He turned to leave.

“By the way, what did her psychic say to get her so riled?”

Larry chuckled. “You’re going to love this one. Said her son was going to prison.”

“That chiseling shyster…. She told Mom you were going back to prison? No wonder—”

As my little brother laughed, I heard the sirens grow louder, drowning out the waves crashing over beachheads. 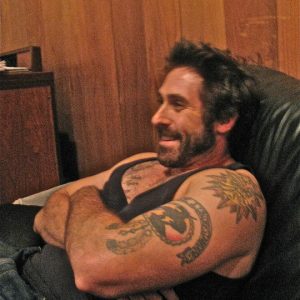 Joe Clifford is acquisitions editor for Gutter Books and managing editor of The Flash Fiction Offensive. He is also the producer of Lip Service West, a “gritty, real, raw” reading series in Oakland, CA. Joe is the author of three books: Choice Cuts and Wake the Undertaker (Snubnose Press), and Junkie Love (Battered Suitcase Press). Joe’s writing can be found at www.joeclifford.com.