My words came out a jumbled little mess. Vowels usually dribble out your nose like nervous snot when you have the barrel of a .38 jammed into your mouth. I was sitting in an uncomfortable chair, in an unconformable room, in the back of what used to be a Dairy Queen, while watching my wounds spit tiny splashes of red onto the concrete floor. I had two bullet holes in me from a botched bank robbery, one in my shoulder and in my side, that sucked in and out with every painful breath. The guy with the gun in my mouth was my partner Cokie Monster, named after his insatiable love of coke and pretty much all speed.

“You got my brother killed over a dog?” He yelled.

What he was saying was very true, but it sounded silly when he said it out loud. Things went bad, I’ll admit it. We ended up here after what was supposed to be an easy score. My partners little brother was left at the bank with a slug in his head, his brains spread on the shiny white floor like one of those abstract paintings that rich people bought. Things were going fine in there, until my mind started to wander, and the blind lady brought the dog in with her. I have ADHD and a deep love of animals. I told him, we should have done this tomorrow.

He grips the gun tighter. He’s going to do it.

I didn’t think nothing about the security guard being in the bathroom. Monster’s brother should have never gone along with us on this one.  He was always a bit dim-witted and made bad decisions. There were only a few people in the bank, a old farmer, a housewife, and a blind lady with a seeing eye dog. The job looked like a piece of cake, until the old bank guard walked out the bathroom with his gun blasting like a late night western. He missed with his first two shots, but the third one bit me in the side like heated teeth.

Monster’s brother grabbed the blind lady and put his gun to her temple. The dog went slobbering mad and grabbed him by the arm. I remember Monster yelling shoot the goddamn dog, but I couldn’t, it looked just like the dog I had when I was a kid. I loved that freaking dog.

It felt like the entire bank lobby was under water as the security guard shot again, and that’s when one of the bullets caught Monster’s little brother square in the head. Pop!

I fired off a round toward the guard as he went to reload.

That’s when Monster started shooting at me. I was shocked at first, that my own partner was trying to kill me. I turned my aim at him and headed as fast as I could to the front doors.

I was halfway out the glassed in portal of the front doors when a bullet came crashing through and  ripped into my shoulder. My entire arm felt like it had been ripped out of socket. I managed to pull myself up and run to our get away car and haul ass to our safe location…the abandoned Dairy Queen. We had a first aid kit there, but I knew I was beyond a few band-aids and gauze. I  was just about to call an ambulance, when I passed out and woke up with Monster’s gun in mouth.

“You got my brother shot over some stupid ass dog,” he said.

I nodded my head and pleaded with watery eyes.

He pulled the trigger, but the gun just clicked. He pulled it again and there was another empty click. He was out of bullets. Thank god.

I used the little strength I had left to push him back against the wall. I nearly passed out again as I ran to the back door. I threw it open to find at least a dozen cop’s with their gun’s pointed at me. There were even a few dogs there like the one at the bank. I don’t remember if I mentioned it earlier… 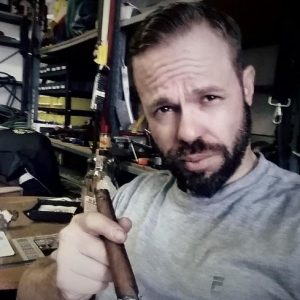 Craig E. Sawyer – Imaginer/Writer/Actor/ is descended  from the Scottish Clan MacKay, and is a direct descendant of the McCoy family that famously feuded against the Hatfield’s for many decades over a stolen pig. Craig traveled much of the United States before settling on the West Coast. He has worked as a bartender, roofer, salesman, and bouncer.

If you enjoyed this short story, please look for Craig’s soon to be released short story collection: Brass Knuckled Bastards, Cutthroats, and Ne’er-Do-Wells at Amazon Kindle Store. You can also find a list of all his available work on his author page at amazon.com/author/csawyerwriter, or join his Instagram @csawyerwriter.