This guy.  The guy across the street. The guy on the opposite corner, selling dogs like I ain’t already over here with my cart.  He’s a real piece of work.  Thing is, I ain’t selling hotdogs, and neither’s he.  I mean we’re selling hotdogs, but hotdogs ain’t all we’re selling.  If somebody needs something a little harder than alcohol, or if somebody needs a guy’s arm broken, then they come see the hotdog man.

Everybody used to come see me to place a bet or get a small loan, but not no more.  The guy across the street got all the business.  Yeah, he’s looking at me right now.  “How are you doing, shithead?  Yeah, have a nice day, asshole.” Yesterday, I went over there and punched him in the head. Of course he hit me back.  Split my damn lip.  But that’s okay because today I’m coming out on top.

I really ain’t playing. The guy on the opposite corner don’t take the hint, so I have to take extraordinary measures.  Nobody’s going to frequent his place of business after what I just did. See, when he ducked out earlier to take a leak, I walked over to his cart and poisoned his diced onion tray with arsenic.

When the guy across the street comes back, I shoot him a sneering death stare from my cart. Damn. I got to water the crops now too. The paperboy who just showed up on the corner keeps an eye my establishment while I step away.  He knows what’s up.  I take my wad of cash though, I ain’t no sucker.  Down the street, I hit up the market.  The owner don’t have a public toilet, but he lets me use it anyway. He knows not to refuse the hotdog man.

When I return to my business, there’s a line of people queued up in front of jack-off’s cart across the street.

“Eat up, suckers,” I say with a laugh, and make my own hotdog.  I squirt extra mustard on it, and make it rain onions.  “Oh yeah, baby.”

“What’s so funny, pops?” the paperboy asks with a confused look on his face.

“Ain’t this a great place, kid?” I say.  “Some countries are known for opera and architecture, but us, we got hotdogs.”

“His hotdogs, pops,” The paperboy says. “Not yours.”

“It ain’t wise to move in on a hard workin’ guy’s business.  Guy does something like that ends up in unfavorable circumstances.”

“Like selling all his dogs while you’re stuck holding your own tube steak?”  The paperboy asks.  “Is that what you mean by unfavorable circumstances?”

“Heard there was a bad batch of onions going around,” I say, and disappear half my hotdog into my face.

“What’s weird?” I ask.  “They got all kinds of health hazards out in the fields.  Salmonella, listeria and what have you.”

“No, it’s weird you mentioning onions.”

“No, that you said that guy over there might get bad ones.”

“No, it’s weird because when you left to take a piss, he came over with a tray of diced onions, and put it in your cart.  I asked him what he was doing, and he told me he was returning the onions you gave him earlier.”

I look down at my half eaten hotdog.  A few diced onions lay against the gnarled sausage.

I sidestep left, and collide hard with a street lamp.  Where the hell did that thing come from?  Why is everybody staring at me all of a sudden?  Is that blood in my eyes?  Didn’t realize how fast this stuff kicked in. I can’t see for shit.  Placing my hands on the cart for balance, I lean forward with a gasp.  My strength withers as my head plunges into the vat of hotdog water bubbling below me. 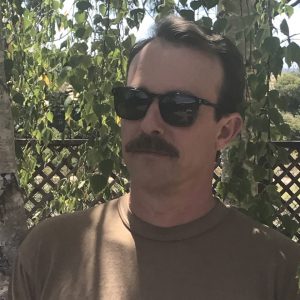 Morgan Boyd lives on the Monterey Peninsula with his wife, daughter, cat and carnivorous plant collection.  He is currently working on a collection of short stories, and has an MA in television, film, radio and theatre from San Jose State University.  His thesis: The Gold Mountain Theater Riots was nominated for the 2012 SJSU Outstanding Thesis of the Year Award.  In his spare time, Morgan is a tenured high school English teacher.